At the start of June, Finland’s Ministry of Foreign Affairs released the Finnish government’s second action plan for China. Finland’s previous action plan for China was issued in 2010. The plan presents the Finnish government’s consensus view of China. However, it does not include any new policy changes with respect to China, but it clarifies the current policies and methods of engaging with China. The plan sustains Finland’s moderate China policies, which emphasise the importance of continuity and cooperation. Finland’s relations with China mostly involve commercial or economic matters, but Finland and China have been working together in other spheres such as rule of law and environmental and climate issues.

According to the foreign ministry, it was an appropriate time to update its decade-old action plan to reflect changes in the operating environment and available information. The new action plan is more detailed and wide-ranging than its predecessor. It acknowledges China’s geopolitical rise, the general increase in global tensions, which is reflected in the plan’s weightings and harsher tone of voice. The action plan calls for levelling the playing field and ensuring reciprocity in economic relations echoes current EU China policy. China’s human rights violations and global engagement also have greater emphasis on the new action plan. The plan gives considerable weight to cooperation among countries with similar views on China issues (EU, Baltic countries, Nordic countries and the US).

In June, Finland’s Ministry of Foreign Affairs and the Confederation of Finnish Industries released another report that discusses the impacts of the competing interests of the US and China on Finnish firms. The report notes that competition has increased risk in the high-tech sector, an important area for Finnish industry. The tougher operating environment could be evidenced in such measures as sanctions, restrictions on market access, increased regulation of public procurement and politicisation of standardisation, all of which may potentially affect Finnish firms. Thus, Finnish firms need to be more knowledgeable about the competitive struggles of China and the US, and related Finnish actors should work together more closely in assessing the situation and keeping each other informed.

Finnish companies have sizable subsidiaries in China, employing in total over 62,000 people 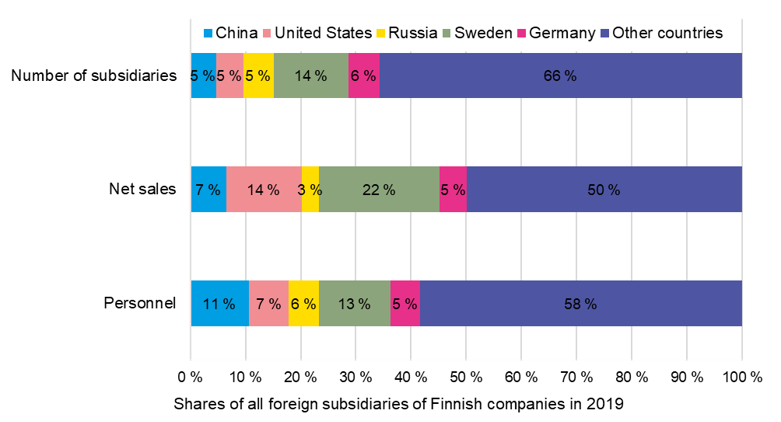