China’s bond markets have grown remarkably in recent years. The value of corporate, financial and government bonds on issue climbed to $18.6 trillion at the end of 2020, or nearly double the value of 2016 and over four times more in 2012. Although China’s bond market is significantly smaller than the US bond market (just over $47 trillion), it is already larger than that of Japan ($14.7 trillion). Moreover, no other emerging-economy bond market even ranks in the same league as China. Brazil’s bond market, for example, is less than a tenth the size of the Chinese bond market.

Government bonds (central and local governments) represented about 40 % of China’s bond market last year. Growth in government bond issues has been led by the increase in the volume of bond issues of provincial and municipal governments since 2015. With last year’s stimulus measures, the share of bonds issued by local governments rose to 22 %, exceeding the share of central government bonds (18 %). The government’s role in China does not stop there, however. Even if corporates account for a larger share of the bond market than in most countries, many firms are state-owned. In addition, a large chunk of financial institution bonds have been issued by China’s policy banks.

In recent years, China’s bond market has opened up more to foreign investors. The landmark event took place in July 2017 with the inauguration of Bond Connect linking the Hong Kong and mainland China bond markets, making it practical for foreign institutional investors to trade directly on China’s interbank market without having to adhere to quotas or preliminary announcements. Since then, foreign investment in China’s bond market has grown steadily. IMF figures show that about 3.5 % of current bond issues and about 10 % of China’s government bonds are in foreign hands. At the end of 2018, national central banks held nearly 80 % of the Chinese bonds in foreign hands. Over the past two years, the bonds of China’s public entities and policy banks have been incorporated into several major bond indices, which in turn has increased interest in Chinese bonds outside the realm of central banks. 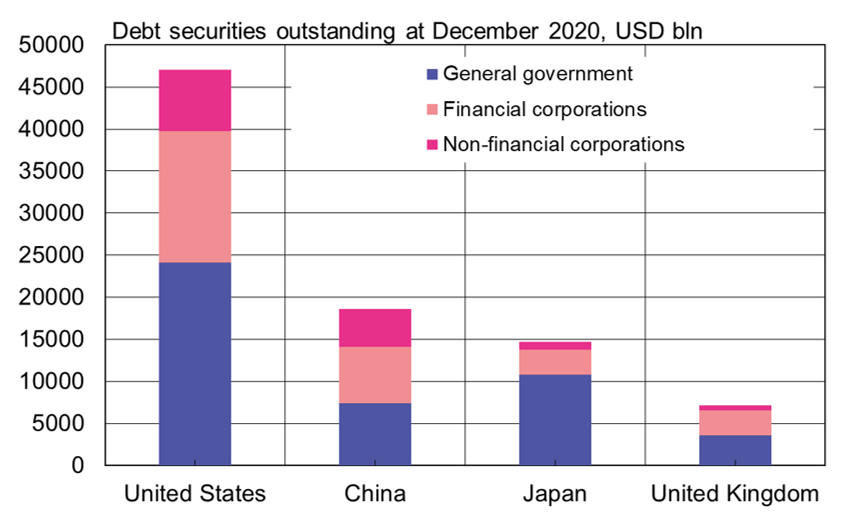