At its July meeting, the Central Bank of Russia raised the benchmark key rate by 100 basis points to 6.5 %. With Russian consumer prices climbing rapidly in recent months, the rate hike came as no surprise to the market. 12-month inflation hit 6.5 % in early July, a pace well above the CBR’s 4 % inflation target. Inflation expectations have also risen in recent months. Household inflation expectations in July were at their highest level in nearly five years.

The CBR attributes much of the recent uptick in inflation to the inability of supply to keep up with the better-than-expected recovery in demand. The central bank now believes that the Russian economy reached the pre-pandemic level already in the second quarter of this year. Not only is unemployment decreasing, but labour shortages have appeared in some branches, adding pressure to boost wages. Some of the recent burst in inflation is due to transitory factors. For example, the inability of most Russians to travel abroad on holiday this summer has caused a huge increase in prices of domestic travel services.

Commenting on the outlook of monetary policy, CBR governor Elvira Nabiullina said that, based on the central bank’s current assessment, the key rate next year is likely to average in the range of 6–7 %. Thereafter, it should gradually fall to 5–6 % which the CBR sees as compatible with the 4 % inflation target in longer term. The CBR will, however, start the evaluation of its monetary strategy this autumn and consider e.g. whether it may be appropriate to lower the inflation target. 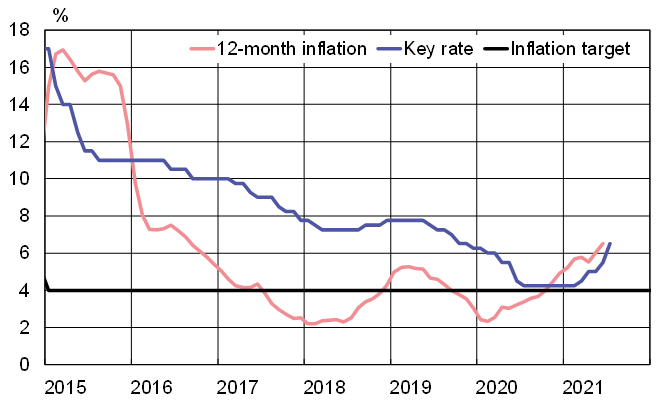