At the end of August, the National Welfare Fund (NWF), which has been built up from taxing the energy sector, reached $180 billion, or 11.7 % of forecasted 2020 GDP. The NWF has increased by about 45 % this year in dollar terms. The tax revenues set aside from oil and gas earnings last year were transferred to the fund in March (BOFIT Weekly 2020/13). In addition, appreciation of the euro against the US dollar has helped increased the value of the NWF in dollars. Smaller amounts have been withdrawn from the NWF this year to cover budget shortfalls caused by the Russian government’s fiscal deficit. The value of assets in the NWF last surpassed such heights in late 2008 and first half of 2009, when the value peaked at $225 billion.

Slightly over $119 billion of the NWF are invested in highly liquid bonds of countries with high credit ratings. The remainder is invested in such forms as deposits in Russia’s state development bank VEB ($7.8 billion) or other Russian entities designated by the government. Majority stake in Sberbank that was bought from the Central Bank of Russia ($34.9 billion) represents the largest single investment (BOFIT Weekly 2020/17). These assets are part of the national investment strategy of enhancing the long-term growth prospects of the Russian economy.

The National Welfare Fund has seen large gains this year 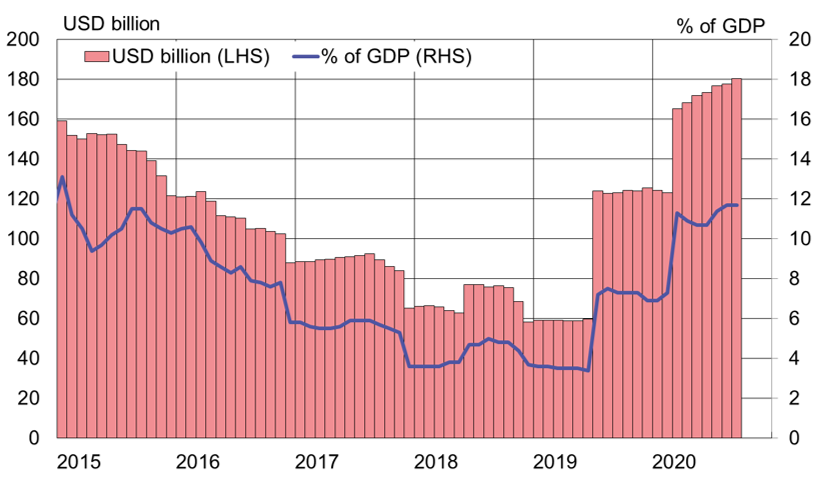