In Russia, the real volume of fixed investment declined in the second quarter by about 7.5 % y-o-y. The drop was less steep than those experienced during the recessions in 2009 and 2014−2015. In those slumps, fixed investment dropped by over 10 %. After the latter slump, fixed investment has recovered, but still last year reached only levels that corresponded to those of 2012−2014.

Second, investments in major sectors governed by the state, i.e. healthcare and education, have seen strong increases in investment, similar to the past couple of years. In addition, investment in government administration has climbed briskly this year, which is also reflected in investment financing. Funding from federal, regional and municipal budgets began to rise considerably already last year after a hiatus of several years. Budget funding this year has accounted for an unusually large amount of the increase of total investment funding, particularly in the second quarter.

Thanks to sustained strong growth in a couple of core branches such as foodstuffs and the metals industry, investment in manufacturing (not including oil refining) dipped by just about 3 % y-o-y in the first and second quarters of this year. In several other manufacturing branches, the on-year decline in investment in the first quarter was already notable before steepening in the second quarter. In particular, large contractions have been witnessed in manufacturing of metal products, certain branches of machinery & equipment, as well as automobile production. Among non-industrial sectors, declines in the first half of this year in investments in oil & gas pipelines, as well telecommunications equipment and networks, have significantly contributed to the fall of total investments.

On fixed investments of the state and large or mid-sized enterprises in different technical modes of capital data are only available in value terms. Fixed investments in production systems and infrastructure, the largest spending category, have partly recovered from last year’s slump. The increase of spending was fairly brisk compared to the rise in prices of investments. Much of this year’s increase reflects investment in the gas sector and some growth in investment in crude oil production, which at least for the time being has not been hit by low oil prices or the OPEC+ agreement on production cuts. Increased spending on machinery & equipment, the second-largest category, in the second quarter roughly matched price increases on machinery & equipment going to fixed investment. Spending on transportation vehicles and construction of non-residential buildings saw sharp contractions in the second quarter. 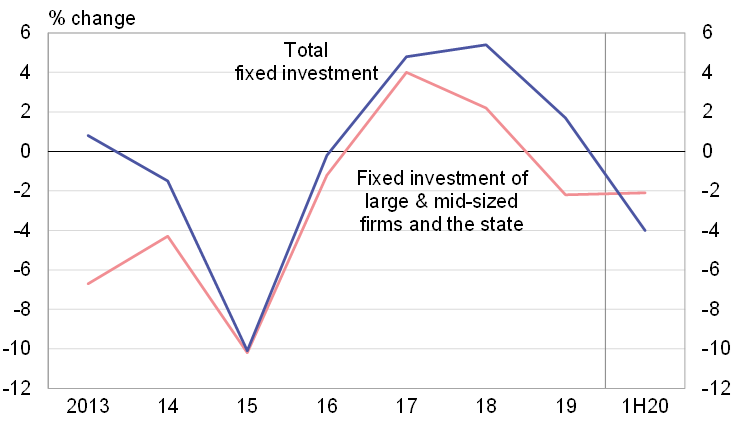