Our latest BOFIT Forecast for China was released yesterday (Sept. 17). The Chinese economy has bounced back from the Covid-19 crisis faster than predicted in our March forecast. We now expect China’s GDP to increase slightly this year (about 1 %). In coming years, economic growth will be restrained increasingly by ageing population and shrinking working-age demographic. The need to balance public sector finances has also become more critical, as public-sector deficit will approach 20 % of GDP this year and government debt will near 100 % of GDP. Due to stimulus measures, spending on infrastructure and construction projects is strong despite concerns on cost-effectiveness of China’s huge annual investments. Slow progress in reforms will keep productivity gains modest. Even with all these factors, 2021 on-year GDP growth should be impressive (about 7 %), thanks to the exceptionally low reference figures for 2020. GDP growth will slide back to around 3 % in 2022.

Uncertainty has increased due to heightened tensions between China and other countries. China has become more aggressive on its borders and beyond, and has imposed stricter controls on citizens domestically and in Hong Kong. Relations with the US are likely to continue to degenerate and decoupling is expected to proceed, which will cloud the growth outlook for China.

The large risks lurk in the financial sector. Overall indebtedness has re-accelerated and businesses in many branches have seen their ability to serve debt eroded by Covid-19 crisis impacts. Many countries that have embarked on similar long-running borrowing binges have eventually found themselves in financial crisis. The risk of a major disturbance in financial markets has grown. A new broad-based wave of Covid-19 infections in China would slow economic growth and significantly increase financial market risks.

Even with a rapid recovery from the first-wave Covid-19 shock, Chinese GDP growth will undershoot pre-crisis forecasts 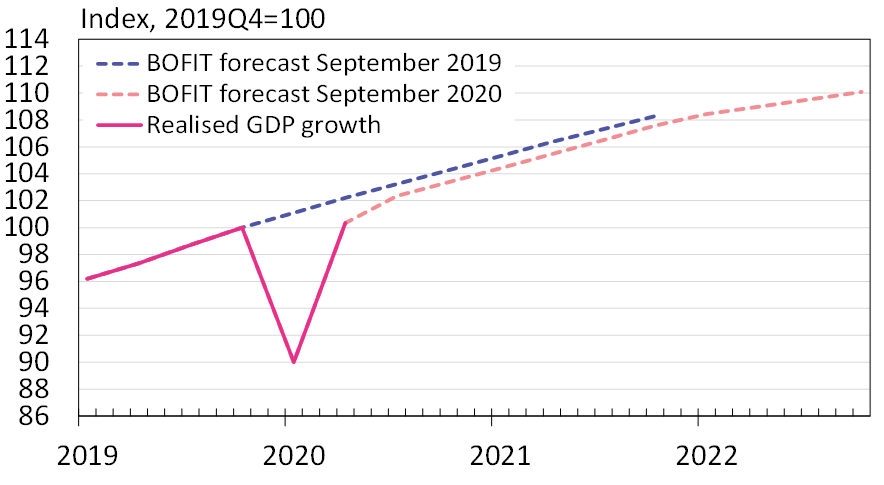