With the Chinese economy recovering, the plight of industrial firms has also improved. July was the third month in a row that industrial firms reported on-year increases in profits. However, with the coronavirus pandemic dragging down profits in the early part of the year, profits for the first seven months of 2020 were still down by 8 % y-o-y. The recovery in profitability of privately-held industrial enterprises (down 5 % y-o-y in January-July) has fared significantly better since February than state-owned enterprises (down 24 %).

The coronavirus crisis is reflected in diverse profit trends across industrial sectors. In particular, profit increases in January-July were led by manufacturers of computers and communications technology (up 29 %). Profits increased also for manufacturers of instruments, machinery and special equipment. The profits of pharmaceutical companies rose by 5 % y-o-y. Reflecting a common trend in commodity prices, profits in the mining industry were down (e.g. coal industry profits declined by 33 % y-o-y), energy production (e.g. oil & natural gas down by 72 %) and chemicals (down 28 %). Profits of clothing and furniture manufacturers were well below last year’s levels (down 26 %).

China’s official composite NBS Manufacturing Purchasing Managers’ Index (PMI) remained at a slightly positive reading of 51.0, or about the same as July’s reading of 51.1. The production sub-category of the manufacturing PMI has recovered especially fast from February’s massive drop. Among the manufacturing PMI sub-categories, only new export orders experienced a second drop in April and May as measures to suppress the spread of the coronavirus caused many countries around the world to close their borders. In August, however, the reading for new export orders surpassed the July number, putting it above the average for all of 2019, even if the reading was still below 50 points, level that reflects growth in economic activity. Markit’s Caixin General Manufacturing PMI rose by several tenths of a percentage point in August to 53.1 points. 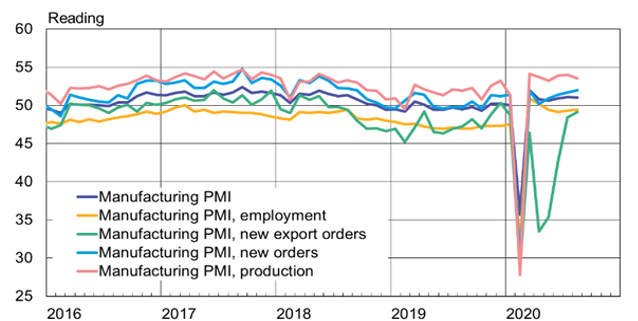