On March 19, Russia’s finance ministry reported that it had completed the final transfer of last year’s excess oil and gas earnings to the National Welfare Fund (NWF). In total, the NWF’s assets amount now to roughly 12.2 trillion rubles, about 157.2 billion dollars at last week’s average exchange rate. At the end of 2019, NWF assets totalled 125.6 billion dollars.

The NWF currently corresponds to slightly over 11 % of Russian GDP. Some 10.5 trillion billion rubles (9.6 % of GDP) is invested in highly liquid securities. This provides Russia with an economic buffer in a situation where the oil price has dropped precipitously and the economic impacts of the coronavirus are still hard to predict.

The transfer of Sberbank’s shares from the CBR to the government should also increase government revenues (BOFIT Weekly 2020/09). In February, the CBR and the finance ministry agreed that the CBR would divest its holdings (a 50 % stake plus one share) in Russia’s largest bank to the finance ministry. The arrangement will increase the CBR’s income which then goes to the state. Under Russia’s fiscal rule, such income can be used to cover supplemental spending, even if the price of oil exceeds the roughly $42/bbl. assumption in the fiscal rule. The sale has been postponed due to the recent stock market crash and rebound, but many observers still believe the deal will go through.

Part of Russia’s macroeconomic strategy has included the building-up of foreign currency reserves, so that high oil prices would not drive an over-appreciation of the ruble’s external value. Under the government’s fiscal rule, the CBR purchases forex from the market with rubles. On March 13, Russia’s foreign currency and gold reserves amounted to 581 billion dollars, its highest level since August 2008. The CBR has now started to sell forex from its reserves in order to prevent rapid swings in the ruble’s exchange rate. For example, in the first part of this week the CBR sold about 75 million dollars in forex daily.

As part of its currency and gold reserve management duties, the CBR oversees the liquid assets of the NWF (BOFIT Policy Brief 4/2015). When the finance ministry needs NWF funds, it withdraws money from the CBR in the form of rubles, so the size of Russia’s currency reserves remains unchanged. 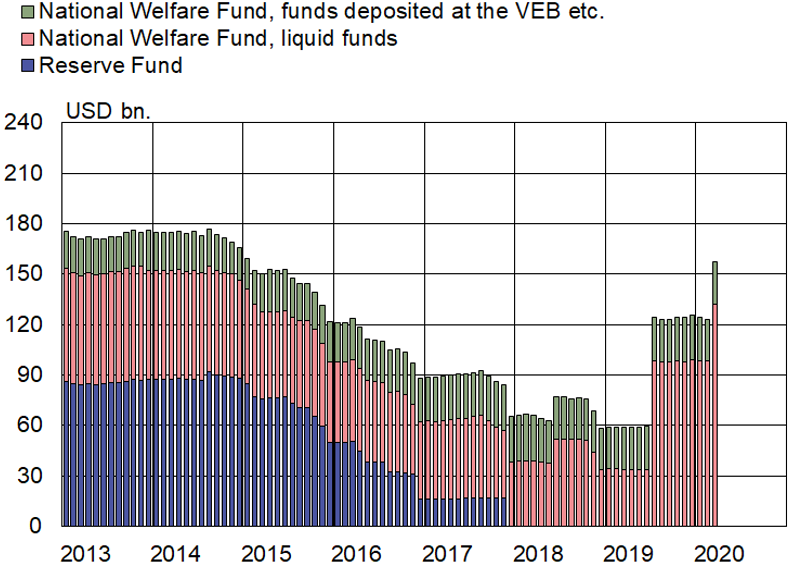