The value of Finland’s goods exports to Russia decreased by 32 % y-o-y in the second quarter. Exports were dragged down by the sudden contraction in Russian demand caused by the coronavirus pandemic lockdown and restrictions, turbulence in global oil markets, as well as ruble depreciation. The plunge in exports was amplified by the relatively high reference point last year due to one-off gas pipeline deliveries. Pipes used in the Nord Stream 2 project were coated in Finland and thus recorded in the Finnish customs statistics first as imports from Russia and later as exports to Russia. Excluding the pipelines, the value of goods exports to Russia from Finland contracted by about 20 % y-o-y in April-June, i.e. the same amount of decline as the rest of Finland’s goods exports. There were two-digit drops in Finnish exports to Russia in all major product categories in the second quarter. In recent months, however, Finnish exports to Russia appear to be experiencing a gradual recovery. Russia this year has accounted for 5 % of Finnish goods exports, making it Finland’s sixth most important export market.

Finnish services exports to Russia also appeared to contract sharply in the second quarter, mainly on a slump in tourist services. In order to curb the spread of Covid-19, tourism in both Finland and Russia has been extremely restricted. As a result, the number of crossings of Finland’s eastern border with Russia crashed and overnight stays by Russians were almost non-existent last spring. In recent years, tourism has accounted for about half of all of Finland’s services exports to Russia.

The value of Finland’s goods imports from Russia contracted in the second quarter by about half from a year earlier. While much of the collapse in the value of imports can be attributed to plunging crude oil prices, the volume of crude oil imports also declined sharply. The drop in imports, however, appears to have plateaued in recent months as oil prices have rebounded. Russia accounted for about 10 % of goods imports to Finland this year, and Russia is Finland’s third most important import provider.

The value of Finland's goods trade with Russia, especially imports, has declined this year 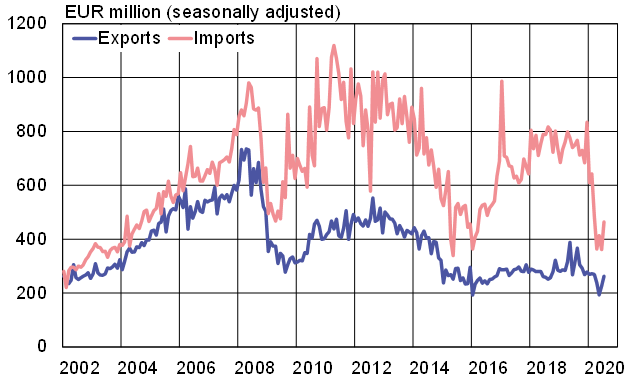