Preliminary balance-of-payments figures released by the Central Bank of Russia show that Russian earnings from exports of goods and services fell in the second quarter of this year by a couple of per cent in on-year terms. The last such on-year drop was seen in autumn 2016. The contraction in export earnings arose mainly from developments in the energy sector, where export prices were lower than in 2Q18.

Russian spending on imports of goods and services, which since last summer has been running at about the same level as four quarters earlier, remained in the no-growth situation in the second quarter of this year. While this feeble track mainly concerned goods imports, growth has also been slow in imports of services such as Russian spending on tourism abroad. 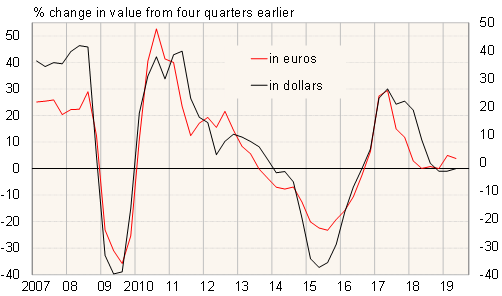