The average life expectancy of Russians and their living standards have risen steadily since the start of the millennium. Consumption of tobacco and alcohol products has also declined. The birth rate remains low, however, so Russians on average are getting older and the age dependency ratio continues to deteriorate even if immigration from countries close to Russia somewhat offsets the decline in population. In the 2010–2018 period, immigration to Russia was 2.2 million more than people moving out of the country. Russia’s current dependency ratio of 63 means that for every 100 persons of working age, there are 63 minor children or persons over the age of 65. The corresponding figure for Western Europe is 72. Russia’s dependency ratio will climb to 77 in 2030 and 83 in 2050. The ratios for Western Europe at those times will be 83 and 94, respectively.

The Russian population is becoming concentrated in cities. The populations of Moscow and St. Petersburg are expected to rise by 3–4 % by 2035, while the populations in Russia’s other 13 cities with populations of more than a million will increase by about 2 % during the same period.

The differences in trends in Eastern Europe and Central Asia are striking. The populations of Russia, Belarus, Ukraine, Moldova, Armenia and Georgia are ageing and shrinking. The biggest drop is expected in Ukraine, which should fall from the current 43.7 million to 35.2 million by 2050. The total population of Central Asia (Kazakhstan, Kyrgyzstan, Uzbekistan, Tajikistan and Turkmenistan) is expected to rise from the current 74.3 million to 100 million by mid-century. At that time, the most populous country of Central Asia will be Uzbekistan (up from 33.5 million today to 43 million in 2050). 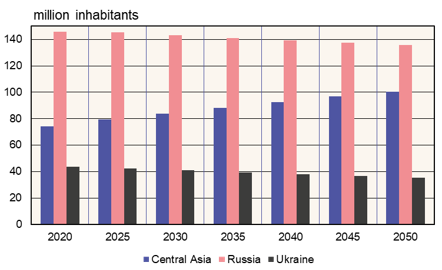