Budget revenues in the first half of 2019 climbed 10 % y-o-y in nominal rubles, even when the high pace of growth that boosted tax revenues from oil & gas exports has settled. Oil & gas-related revenues in January-June increased by just 5 % y-o-y. Other budget revenues, however, climbed by 14 %, supported in part by the inclusion of revenues from the VAT increase at the start of the year in the second quarter budget.

Federal budget spending was up just 3 % y-o-y in nominal terms in January-June, i.e. lower than inflation. Defence spending declined slightly. The pace of budget spending is expected to pick up in the second half as the national projects delineated by president Vladimir Putin in May 2018 move further into the implementation stage. Total projected budget spending for this year includes a recently approved small supplemental budget and should raise spending growth to about 10 % from last year. Defence spending should rise by 3−4 %.

While growth in federal budget revenues was brisk in the first half, growth in spending this year has been slow. The disparity has created a booming budget surplus that as a sum over the past 12 months has exceeded 3 % of GDP in recent months. For all of 2019, however, the finance ministry only expects a surplus of 1.7 % of GDP as long as the price of Urals crude averages just over 63 dollars a barrel (Urals averaged 66 dollars a barrel in January-June). 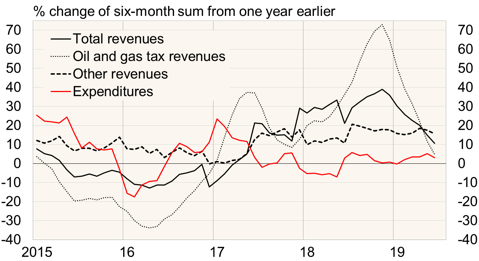