Newly released Rosstat figures show that the slowdown in GDP growth to just 0.5 % y-o-y in the first quarter was due to simultaneous weakening performance of both domestic demand and exports. The value-added tax hike at the start of the year had a one-time impact on domestic demand.

Fixed investments recovered for about two years after their 2015 collapse, but last year growth flattened. Even with some growth in the first quarter of this year, the very weak investment performance in the final months of 2018 meant investments in 1Q19 were lower than in 1Q18, which was the first on-year drop in three years. Investments were also a few per cent lower than in 2014.

Imports of goods and services to Russia have contracted slightly in several recent quarters. In volume terms, imports were down slightly on-year in the first quarter and off by about 14 % from 2014. 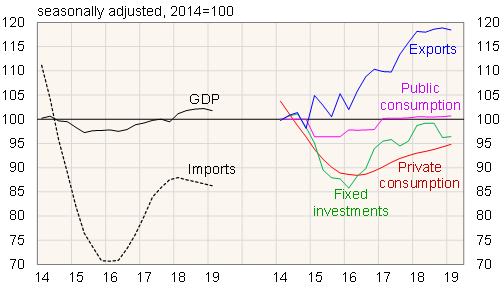