The UN’s new population outlook, World Population Prospects 2019, released last month expects the global population to rise from its current 7.7 billion to 8.5 billion by 2030. The world population should approach 10 billion by 2050, but population trends will continue to vary radically across regions.

In coming decades, population increase in absolute terms will be largest in India, Nigeria and Pakistan. The UN estimates that India will surpass China as the world’s most populous nation in 2027. At that time, China’s population will peak at 1.46 billion people. China’s population should begin to decline in the first half of the 2030s. The UN estimates that just over 1.43 billion people currently live in China and that just under 1.37 billion live in India. The UN estimates are higher than those of the national statistical agencies of those countries (1.395 billion at the end of 2018 for China, and 1.332 billion for India as of end-March 2019). The IMF’s population estimate, which is based on national figures, has India’s population exceeding China’s already in 2023.

While the US population, currently 329 million, is expected to keep growing throughout this century, it will lose its third-largest status to Nigeria sometime around mid-century. Russia currently has the world’s ninth-largest population, but is expected to drop out of the top ten in less than two decades. 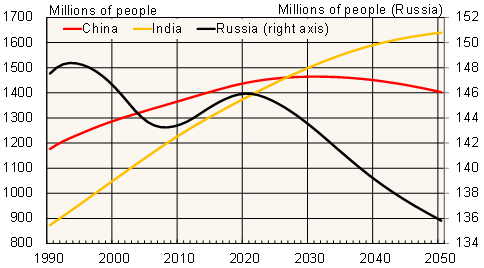