At the end of June, oil giant British Petroleum released its annual Statistical Review of World Energy (production, consumption and trade flows). The BP figures show that China continued to increase its role as the world’s biggest energy consumer in 2018.

Coal remains China’s single largest source of energy by far. China last year burned about as much coal as the rest of the planet. Even if new coal-fired power plants are still coming on line, the importance of coal is slowly waning. Coal-burning, which satisfied 72 % of China’s energy demand in 2008, accounted for just 58 % last year. However, coal-burning is still the basis for two-thirds of China’s electricity production. A big reason for China’s coal dependence is that the country has large coal deposits. Despite an abundant resource base, however, China began to import more coal over the past decade. Even if the amount of imported coal is relatively small compared to domestic production (net imports were 7 % of 2018 production), China has become the world’s biggest coal importer.

China is still the world’s eighth-largest oil producer, even if its output has been declining since 2015. Oil consumption has increased rapidly, which has driven China to import large quantities of oil from abroad (BOFIT Weekly 15/2019). Domestic natural gas production doubled from 2008 to 2018, making China last year the world’s sixth-largest gas producer. In 2008, China still produced about as much as gas as it used, but consumption has since far outstripped production growth and China is one of the largest gas importers. During the past two years, liquefied natural gas (LNG) imports have outstripped pipeline imports. Much of the LNG is imported from Australia, while most pipeline gas is brought in from Turkmenistan.

China is the biggest consumer of hydropower (using nearly 30 % of the world’s hydropower) and renewable energy (25 % of world’s consumption). It continues to rapidly roll out new wind and solar power capacity. Nearly half of all global growth in renewable energy production last year came from China.

While nuclear energy production has quadrupled in China over the past ten years, it still plays a fairly minor role. Nuclear accounts for 4 % of electricity production, as for example renewables already generate 9 % of China’s electricity.

Energy use by category in 2018 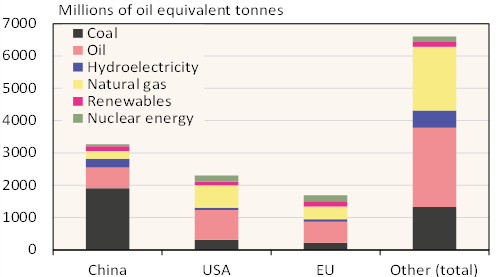