The move was part of the PBoC’s annual review of its reserve requirement ratios (RRRs). In addition, joint-stock banks which are entitled to a 50-basis-point RRR reduction will be granted a further 100-basis-point cut. The PBoC, however, did not reveal which banks were eligible for RRR reductions. The RRR was previously lowered by 50 basis points for all banks in January (800 billion yuan in liquidity) before the coronavirus outbreak (see BOFIT Weekly 2/2020). The liquidity effect was smaller than in the previous operation, however. According to the central bank, the operation freed up 550 billion yuan (79 billion dollars) in bank funds.

On Monday (Mar. 16), the central bank also offered one-year financing to commercial banks through its medium-term lending facility (MLF) for a total of 100 billion yuan (14 billion dollars). The interest rate on MLF lending remained unchanged from the February level of 3.15 %. This indicates the PBoC currently has no plans to significantly cut rates. In March the loan prime rate (LPR), new benchmark for bank lending, remained also unchanged (at 4.05 % for one year loans). A total of 500 billion yuan in one-year MLF credit was granted in January-February and a total of 3.69 trillion yuan for all of last year.

As a broad stimulus could fuel inflation and capital outflows, the PBoC, unlike other major central banks in recent weeks, has kept its monetary stimulus measures more targeted. Driven by soaring food prices, consumer prices rose by 5.2 % y-o-y in February. Skyrocketing pork prices (up 135 %) alone raised consumer prices by 3.2 percentage points. Core inflation, which does not include food and energy prices, slowed to just 1.0 %.

Despite market swings and stunningly weak economic figures, the yuan-dollar exchange rate has weakened by less than 2 % from the start of the year. On Friday (Mar. 20), one dollar bought 7.1 yuan. The value of China’s currency reserves (including gold), has remained virtually unchanged this year, and stood at 3.23 trillion dollars as of end-February. 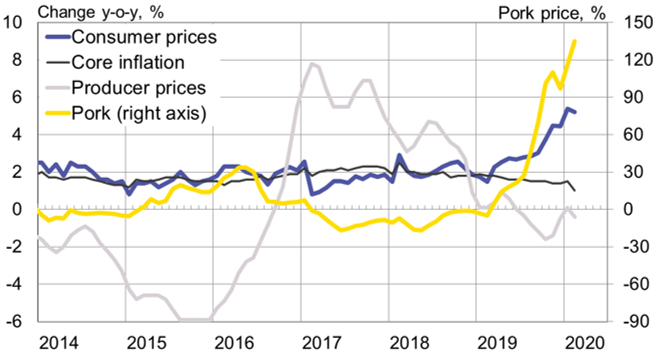