China’s NBS reports that the volume of apartment sales volumes, measured in square metres of liveable floorspace, fell by 39 % y-o-y in January-February. At the same time, the long-standing decline in the stock of unsold apartment came to halt and even increased slightly. New apartment building starts at the beginning of the year were down 44 % from a year earlier. The slowdown in the apartment sales hurt developers’ cash flows and hit an economically important, but already heavily indebted, real estate sector.

There is no reliable statistical data on apartment price trends as news reports suggest that even in major cities only very few apartment sales were conducted in February. One of China’s largest developers, China Evergrande, offered its new apartments at a 25 % discount last month, and were still were offering a 22 % discount this month. Other developers also sought to unload their stock of apartments through discounts, indicating the severity of the downward pressure on apartment prices.

International credit rating agencies S&P and Moody’s expect apartment sales in China will decline overall this year. The real estate sector is expected to see many mergers, acquisitions and bankruptcies. While fewer than 500 companies went belly up last year, already roughly 100 construction companies sought bankruptcy in the first two months of this year. There is an abundance of real estate companies in the sector, however. Bloomberg notes that just in Hubei province, ground zero of the coronavirus epidemic, there are around 4,300 real estate developers. 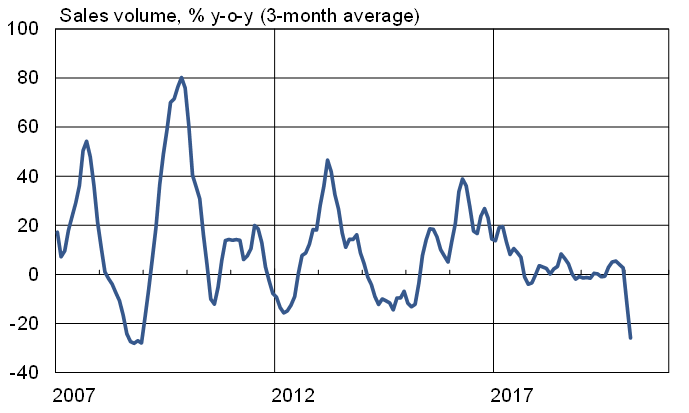