The January-February figures published by China’s National Bureau of Statistics on industrial output, retail sales and fixed investment all displayed the sharpest drops seen since China adopted its current statistical methodologies. Economic activity came to a standstill as the government imposed measures to deal with the coronavirus epidemic. Those measures largely remained in place throughout February.

Industrial output contracted by 14 % y-o-y in the first two months of the year. Production fell by 20 % at privately-held companies, a larger drop than for state-owned enterprises. Manufacturing output decreased by 16 %. Car production plunged by 46 % and production of mobile phones was off by 34 %. The monthly indicator of fixed asset investment (FAI) was down by about 25 % y-o-y in January-February. Investment in infrastructure slid by around 30 %, with investment in manufacturing falling slightly more.

Retail sales declined by 24 % y-o-y. Catering services sales dropped by 43 %. While the total value of e-commerce fell 3 %, online goods shopping rose on higher food sales (up 26 %). The China Association of Automobile Manufacturers (CAAM) reports that the number of cars sold in January-February was down by 42 % y-o-y. There was a similar drop in the volume of mobile phones sales (44 % y-o-y).

Although economic activity has been up in March from January-February, the first-quarter economic contraction will be substantial. Most of China’s big firms are again up and running, but travel restrictions and quarantines have caused labour shortages. Besides the reduction in domestic demand, the coronavirus pandemic and the implementation of crisis measures in countries around the world are only beginning to impact external demand for Chinese goods and services.

The rise in unemployment in February gives some insight into the pain experience by many companies. China’s survey based urban unemployment rate rose from 5.3 % in January to 6.2 % in February. The NBS reports that the average weekly working time decreased by 6.5 hours from January to 40 hours in February. 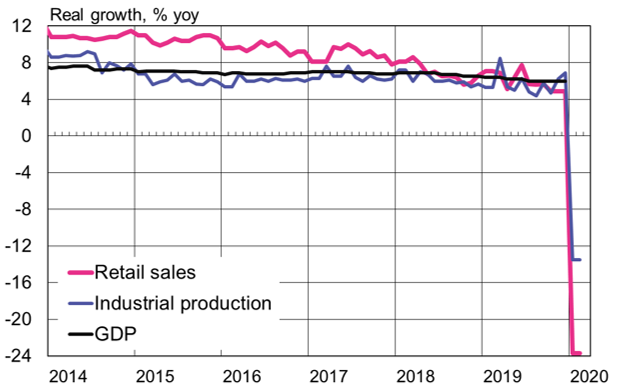