China Customs reports that the value of goods imports decreased by 4 % y-o-y in January-February, while imports of key commodities such as crude oil, despite a small dip, were up slightly on-year. The coronavirus crisis is likely to have a delayed impact on imports as many of China’s import orders were already shipped when the crisis broke out. It takes sea cargo from Europe or the Americas roughly a month to reach China. In addition, deliveries, like certain commodities, may be based on long-term supply contracts that can be difficult to modify quickly. As the drop in production markedly outstripped the decline in imports, inventories in China built up.

Goods import trends varied from country to country. Imports from the EU fell by 19 %, from Japan by 9 % and from Korea by 8 %, while imports from ASEAN countries in Southeast Asia rose by 8 %. While imports from the US rose by 2 %, the value of imports from the US fell short of the amount agreed in “phase 1” trade agreement between China and the US. Under the agreement, China commits to buy every month this year US goods an average of a bit over 5 billion dollars more than in in 2017. To reach this would have required 34 billion dollars in goods imports in January-February, when the actual value of imports was less than 18 billion dollars. It is difficult to see how China manages to meet its agreed purchases this year.

Chinese exports contracted by 17 % y-o-y in January-February and goods trade showed an exceptional deficit of a few billion dollars. China’s export outlook remains bleak. The February purchasing managers index (PMI) showed a collapse in export orders. Since then, the coronavirus crisis has spread to all of China’s main export markets. 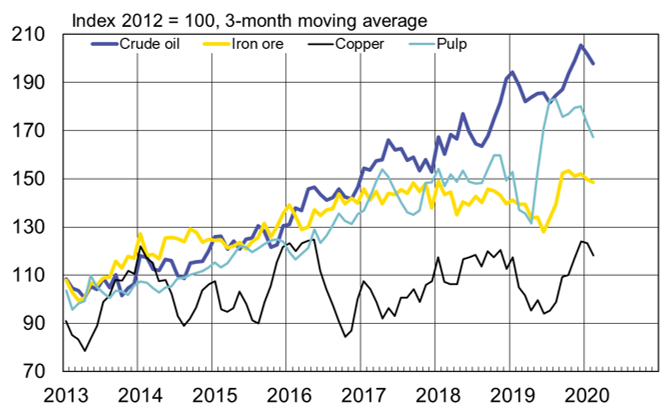