The slow decline in oil prices seen in the first two months of this year accelerated at the end of last week. On Monday (Mar. 9) oil prices collapsed. By Thursday (Mar. 12) the price of Urals-grade crude oil had fallen to just $29.84 a barrel, down over 50 % from the start of January.

The precipitous fall in oil prices reflects the inability of Russia and OPEC’s top producer, Saudi Arabia, to renew their voluntary production-ceiling agreement and negotiate further cuts in production. Russia, OPEC and a number of other oil-producing states (OPEC+) agreed in 2016 to coordinate production, but adhering to the production ceilings has been difficult at times. At talks last week, Russia refused to accept further production cuts, causing Saudi Arabia to blow off the negotiations.

The negotiations on production ceilings among OPEC+ members have been complicated by the rise of shale oil production in the United States. American officials report that the US is the world’s largest crude oil producer (19 % of total global output), with Saudi Arabia dropping to second place (15 %) and Russia to third (13 %). Of the three countries, Saudi Arabia has the best capacity to ramp up production quickly if it sees the need to do so.

As usual, the shift in oil prices was reflected in the ruble’s exchange rate. The ruble lost significant ground at the start of this week. On Friday noon (Mar. 13), one dollar bought about 73 rubles. The ruble is currently about 15 % weaker against the dollar and 17 % down against the euro from the start of this year. Ruble depreciation does not completely reflect the fall in oil prices, however, so oil prices in recent weeks have fallen significantly also in ruble terms. Lower oil prices hurt the government’s tax earnings from oil in ruble terms and degrade Russia’s fiscal situation, even if some of the impact of low oil prices can be blunted with National Welfare Fund assets.

The Central Bank of Russia announced on Tuesday (Mar. 10) that it was resuming ruble purchases from the currency markets along the lines of the government’s fiscal rule. Until recently, the fiscal rule has largely induced the CBR to sell rubles and buy forex, causing Russia’s forex reserves to rise to around 570 billion dollars in February. Russia has the world’s fourth-largest gold and currency reserves after China, Japan and Switzerland.

Russia was not spared in the collapse of oil prices or the stock market crashes. On Thursday (Mar. 12), Moscow’s dollar-denominated RTS index was down 37 % from the start of this year. The share prices of energy companies were particularly hard hit, with the RTS oil & gas sector sub-index off 44 % for the year to date. 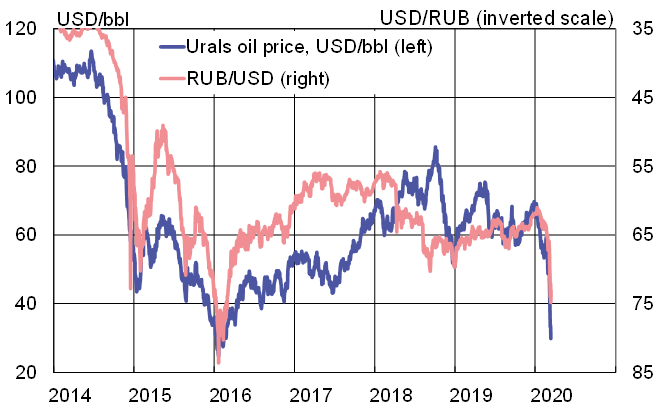