The RRR was previously lowered on a general basis in September, and was followed by further targeted cuts for regional banks in October-November. Like in September, the PBoC estimates that the January easing should free up 800 billion yuan (115 billion dollars) in liquidity from reserve deposits with the central bank. The more accommodative monetary stance is expected to lower financing costs and support economic development. The PBoC says that it expects its monetary policy this year to remain “prudent” as in previous years.

At the end of December, the central bank issued new guidelines on pricing of bank loans. From the beginning of this year, pricing based on the PBoC’s old benchmark rates is no longer permitted, and the pricing of existing floating-rate loans should be changed to be based on the new loan prime rate (LPR). By the end of August 2020, floating-rate loans must be bound to the LPR and state as a difference from the LPR. While banks can freely negotiate interest rates with their customers on most lending, the interest rates on existing housing loans remain unchanged despite the benchmark rate change.

The big takeaway here is that PBoC-defined benchmark rates in bank lending are a thing of the past. Their role has long been unclear as banks have ostensibly been free since October 2015 in loan pricing. The LPR was introduced as a reference for pricing of new loans last August (BOFIT Weekly 34/2019). The PBoC reports that already 90 % of new loans are priced relative to the LPR. The reference rate reform is expected to increase the market's role in pricing and reduce interest rates on bank loans. The one-year LPR is currently 4.15 %, down from 4.25 % in August.

The central bank reduced the interest rate on its medium-term lending facility (MLF) in November. The LPR is set relative to the MLF rate. Rates of reverse repo contracts used in open market operations were cut by 5 basis points in November. 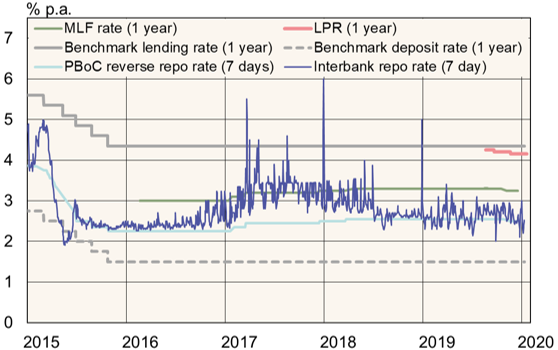