PBoC figures show that growth in the Chinese bank credit stock remained at 12 % y-o-y and the broadest financing measure, aggregate financing to the real economy (AFRE), grew by 11 %. The value of new loans granted in February was 910 billion yuan (130 billion dollars), or about the same as a year ago.

The structure of new borrowing changed, however. Most borrowing was now in the form of corporate loans (1.13 trillion), particularly short-term credits (650 billion yuan). Less “bill financing,” typically linked to trade financing, was granted this year. The stock of household loans shrank by 410 billion yuan, with the stock of short-term household loans decreasing by 450 billion yuan. With the housing market in limbo, banks granted also exceptionally few new long-term loans.

Local governments have been authorised to issue bonds to deal with the rapid increase in spending needs created by the coronavirus epidemic. New local bond issues in January-February amounted to 1,220 billion yuan (up from 680 billion yuan in the same period in 2019). Nearly 80 % of the new funding is in the form of “special purpose bonds” for financing infrastructure projects that should be paid back from income generated by such projects. In February, the stock of bonds issued by local governments increased by 18 % y-o-y (stock of special purpose bonds +35 %) to the equivalent of 23 % of GDP. 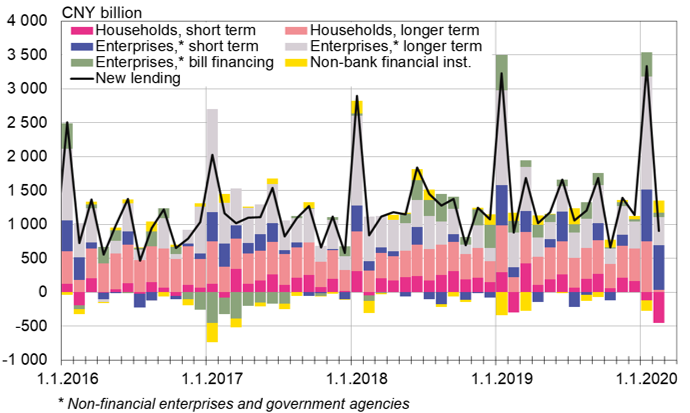