In its latest demographic forecast, Rosstat offers three scenarios for Russian population growth through 2036. In two of these scenarios, the Russian population contracts from current levels. The forecast assumes that Russia’s current population is slightly below 147 million. That figure, however, includes about 2.7 million people living on the Crimean peninsula and Sevastopol, which were illegally annexed by Russia in 2014.

Under Rosstat’s basic scenario, the Russian population declines by 3 % between 2020 and 2036 to 143 million. While the birth rate remains low, Rosstat assumes that immigration to Russia remains high, with a net influx of 260,000 immigrants annually (a level quite similar to the average over the past decade). In 2018 net immigration was about 125,000 persons and in January-October 2019 it was 220,000. Over the forecast period, the annual average number of deaths would exceed the number of births by about a half million.

According to the UN population forecast (BOFIT Weekly 27/2019), the Russian population is set to fall to 141 million by 2035, with a particularly swift decline in the number of working-age persons (15 to 64 years). There are major differences (e.g. estimates on net immigration) in the forecasts of the UN and Rosstat. Russia has traditionally been the destination of migrants from Central Asia and other parts of the former Soviet Union. Rising living standards in those countries could make Russia a less attractive destination, causing fewer people to immigrate. At the same time, emigration from Russia to such destinations as the EU, US and Israel continues. 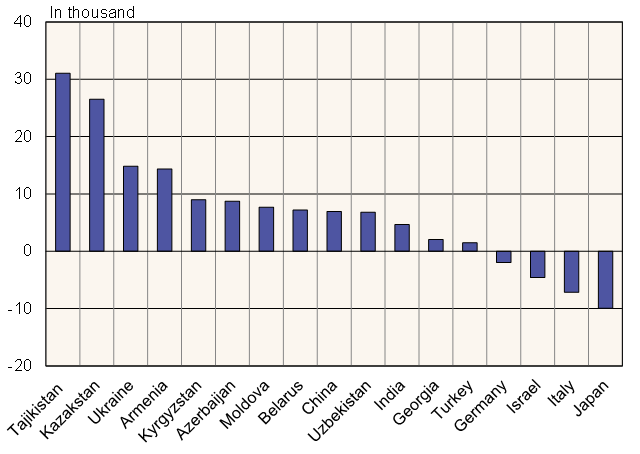