The CBR reports that the value of its foreign currency and gold reserves at the end of last year climbed to 554 billion dollars, an 86-billion-dollar increase from the end of 2018. The increase in the reserves was mainly due to higher oil & gas revenues. The amount oil & gas revenues is reflected in the reserves due to CBR currency market operations conducted in accordance with the government’s fiscal rule. The rule states that when the oil price exceeds the basic oil price (42 dollars a barrel in 2020), the CBR must purchase foreign currency from the market (or correspondingly sell forex when the oil price falls below the basic price). The purpose of these forex interventions is to reduce fluctuations in the ruble’s exchange rate caused by shifting oil prices. The Ministry of Finance announces the amount of these market operations in advance every month.

Russia’s currency and gold reserves are relatively large by international standards. The currency reserves (excluding gold) are sufficient to cover more than a year’s worth of imports of goods and services, or more than three times that needed to cover Russia’s short-term foreign debt.

The structure of Russia’s foreign currency reserves has remained fairly constant since spring 2018, when the CBR moved some of its dollar investments into yuan-denominated assets. At the end of June 2019, 30 % of Russia’s reserves were in euros, 24 % in dollars and 13 % in yuan. Gold made up about 20 % of the reserves. 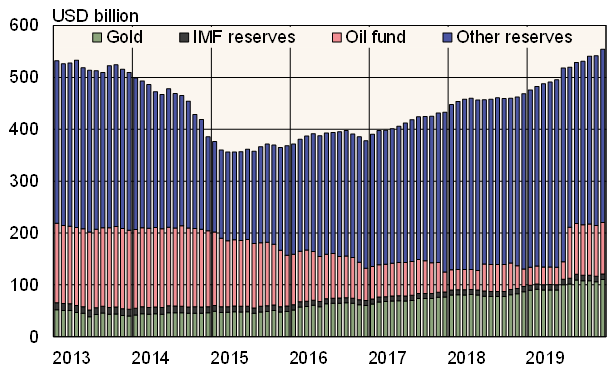