Higher oil prices and a stabilizing economy have created the conditions for replenishing Russia’s National Welfare Fund (NWF) with oil & gas earnings. At the end of 2019, NWF assets reached 7.8 trillion rubles (126 billion dollars), which corresponded to roughly 7 % of Russian GDP.

The NWF grew by nearly 70 billion dollars last year. Much of the increase came from last summer’s transfer to the fund of oil & gas revenues accumulated in 2018. A large chunk of NWF assets (6.1 trillion rubles, 99 billion dollars, or just over 5 % of GDP) is held by the CBR as part of Russia’s foreign currency and gold reserves. These assets are invested in highly liquid USD, EUR or GBP-denominated assets. The remaining assets are tied up in longer term investments such as time deposits in Russian financial institutions or in bonds of infrastructure projects.

Under Russia's current fiscal rule, revenues derived from oil & gas earnings above the base price used in budget formulation (42 dollars a barrel in 2020) are to be transferred to the NWF. Russia’s finance ministry predicts that the price of Urals oil will average 57 dollars a barrel this year and expects the NWF will rise to around 11 trillion rubles (9 % of GDP) by the end of 2020.

NWF assets were initially intended to finance the Russian pension system. Today, however, the main purpose of the fund is to balance cyclical fluctuations, and therefore it can be used under certain conditions to cover budget shortfalls. For example, the government dipped into the fund when oil prices collapsed in 2014. About 90 billion dollars in NWF assets were allocated during 2015–2017 to support the economy.

When the fund’s liquid assets exceed 7 % of GDP, it is possible to invest the excess for supporting economic development. Under a bill pending in the Duma, up to 1 trillion rubles (16 billion dollars) could be used during 2020–2022 to provide credit finance for infrastructure projects and export credits. 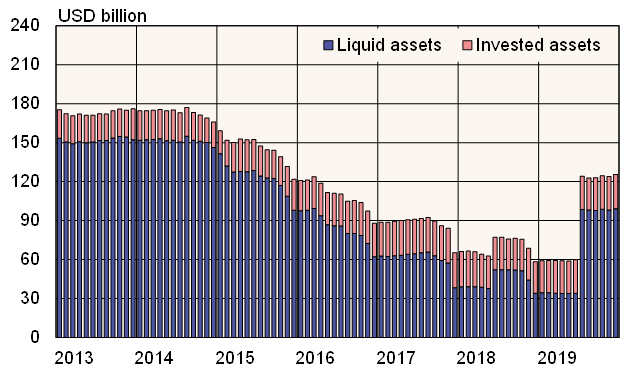