Rising oil prices have helped lift the ruble as they increase Russian export earnings and boost capital flows into the country. The price of Urals-grade crude in the first weeks of this year has averaged around 66 dollars a barrel, which is about 15 % higher than a year ago. The effect of oil prices is, however, restricted by the currency purchases conducted by the Central Bank of Russia for the finance ministry in accordance with the government’s fiscal rule. The link between oil prices and the ruble’s exchange rate seems to have weakened in recent years.

The ruble’s real appreciation against the dollar and euro has been slightly more than its nominal appreciation. While inflation  slowed in Russia at the end of last year, falling to just 3 % p.a. in December, it was still higher than in either the euro zone or the United States. The ruble’s real effective (trade-weighted) exchange rate, or REER, rose by 8 % over the course of 2019. 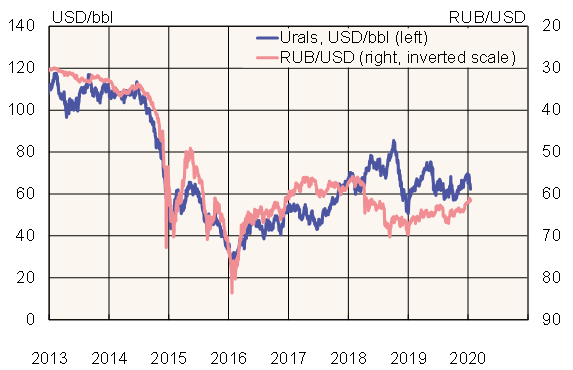