Newly released figures from China’s National Bureau of Statistics (NBS) show that Chinese GDP grew by 6.1 % last year, putting growth well within the government’s official 2019 target range of 6–6.5 %. On-year growth in the third and fourth quarters of 2019 was just 6 %.

The NBS also revised upwards by o.1 percentage point its annual GDP growth estimates for the 2014 to 2018 period. The growth estimate for 2018 is now 6.7 %. Nominal GDP had already been updated at the end of last year on the basis of the newest census data (BOFIT Weekly 49/2019). The revised figures help lock in the government’s politically important goal of doubling real 2010 GDP by the end of 2020. Reaching that decade-long goal still needs growth of at least 5.6 % this year. Pressure on government officials to meet the GDP growth target is one of several factors that have made Chinese GDP growth figures less than trustworthy, particularly in recent years.

Other economic indicators released by the NBS show an across-the-board slowdown in growth. Industrial output growth was just 5.7 % for all of 2019. Industrial output, however, picked up in December to a pace of 6.9 % y-o-y, likely reflecting a brief year-end recovery.

Surveys suggest the urban unemployment rate at the end of December was 5.2 %, up from 4.9 % in December 2018. Chinese unemployment figures show remarkably tiny variation from 5 %, and few observers believe they reflect actual labour market conditions. Even with slowing economic growth, there has, however, been little mention in the news of extensive lay-offs. On the other hand, protests over belated salaries are quite common.

The rise in consumer prices in December matched the November pace of 4.5 % y-o-y. Inflation was pushed up by soaring pork prices, which alone contributed 2.3 percentage points to consumer price inflation. Producer price deflation eased in December, with producer prices declining by just 0.5 % y-o-y (down 1.4 % in November). Consumer prices were up 2.9 % for all of 2019, just below the government’s 3 % target ceiling. 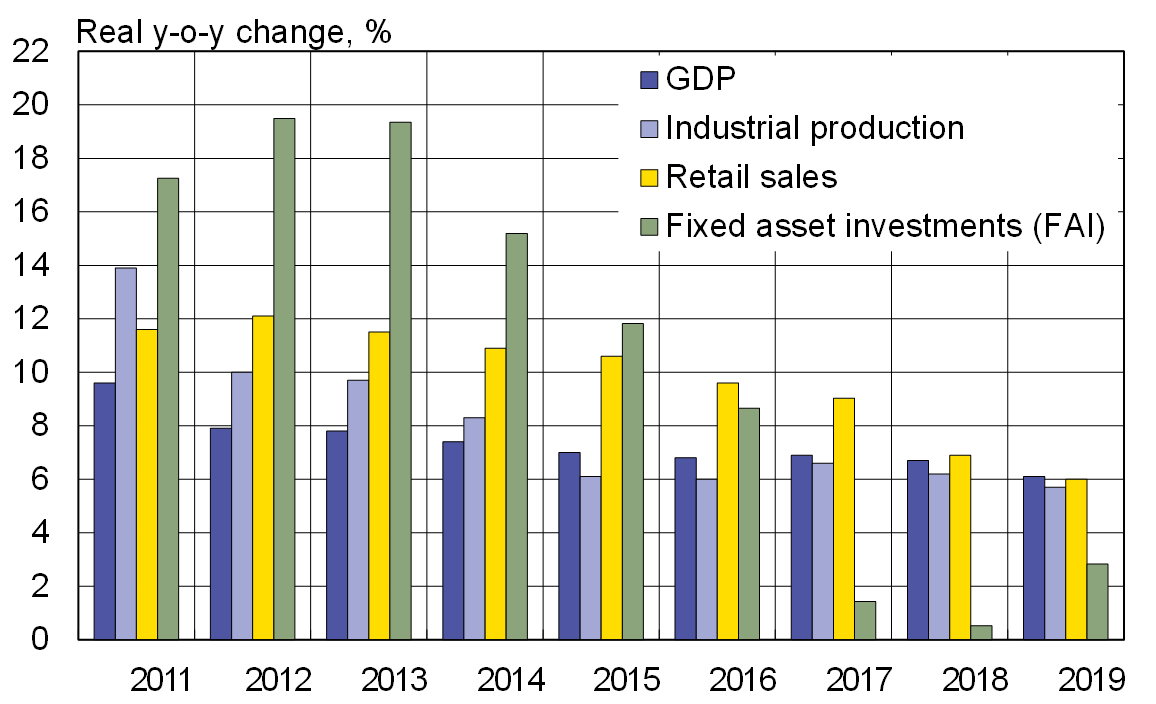