Over the course of June, the yuan's exchange rate dropped 3 % against the US dollar, its deepest low in six months. The trade-weighted yuan is worth 2 % less than at the start of June. On July 2, one dollar bought nearly 6.7 yuan. After slightly appreciating, the yuan dropped again today (July 6). Stock indices have fallen continuously since the slide began in early June. Mainland China's Shanghai Composite Index is down 11 % from early June. Hong Kong's Hang Seng general index has fallen 8 % and the China Company Index by 11 %.

Market reactions were triggered by renewed tensions in trade policies and increased concerns about China's domestic demand. May investments and private demand were both weaker than expected. At the beginning of July, the Standing Committee of the National People's Congress presented a plan for wide-ranging income tax cuts. The tax reform, intended to spur private consumption, would enter into force in October. 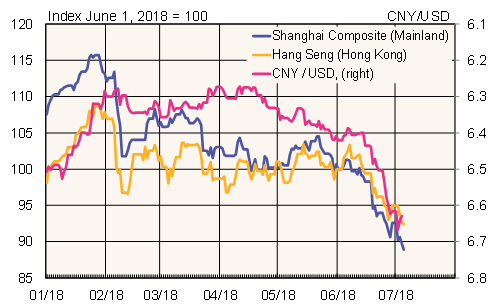