President Donald Trump last week rescinded his threat to impose major restrictions on Chinese investment in the United States. Instead of pushing for specific restrictions on Chinese investment, Trump expressed support for a bill expanding the existing evaluation process of all foreign investments. Nevertheless, the US today (July 6) went ahead with the 25 % tariffs on certain Chinese imports announced in June. China has said it will respond with countermeasures.

Foreign investors currently need US government permission to operate in any branch considered critical to national security. Permits are granted by the inter-agency Committee on Foreign Investment in the United States (CFIUS). Last November, an overhaul of CFIUS's mission was proposed under the Foreign Investment Risk Review Modernization Act of 2018 (FIRMMA), which sought to expand widely the type of entities subject to CFIUS scrutiny. A proposition that keeps strengthened CFIUS oversight of outgoing investment and operation of US firms abroad is winning acceptance. To be rejected, a foreign investment in the US would no longer need to pose a threat to national security. Congress could give final approval to FIRMMA this summer.

The US seeks to restrict Chinese investment, particularly the sectors set to benefit from China's industrial policy flagship "Made in China 2025." China wants to use the programme as a springboard to technological leadership in fields such as aerospace, IT, artificial intelligence and pharmaceuticals. China has financially supported high-tech firms in their international expansion, as well as in acquisition of firms possessing high-tech capabilities. While Chinese investment and acquisitions of foreign firms has exploded, China still seeks to restrict inward foreign investment both with official and unofficial means.

While difficult to glean bilateral investment from official figures, the Rhodium Group claims 2016 was a record year for Chinese FDI flows to the US ($47 billion). The volume of new investment dipped in 2017 to $30 billion. In the first half of this year, the US received less than $2 billion in Chinese FDI. 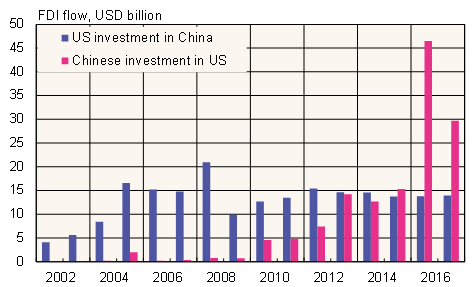