In June, the National Welfare Fund received a 900-billion-ruble boost (14 billion USD) from oil income saved last year, i.e. budget revenues from higher-than-anticipated oil & gas tax revenues. Under the current budget rule, revenues from oil & gas taxes in excess of the threshold average Urals oil price (about 40 USD a barrel) received to the federal budget must be set aside in the fund.

As of end-June, the National Welfare Fund held assets worth a total of 4.8 trillion rubles (77 billion USD or about 5 % of GDP). About two-thirds of them were liquid (i.e. easily converted to cash) currency-denominated assets and counted as part of Russia's foreign currency reserves. The remainder is invested e.g. in long-term deposits in state-owned banks and for financing infrastructure projects of domestic companies.

With the changes for this year's budget law approved at the end of June, Russia's federal budget is now expected to record a surplus of 480 billion rubles on higher oil prices instead of deficit as anticipated before. Thus, fund assets should not be needed to cover budget expenditures, but the fund could be further replenished. Russia's other fund for oil tax revenues, the Reserve Fund, was drained last year and closed. 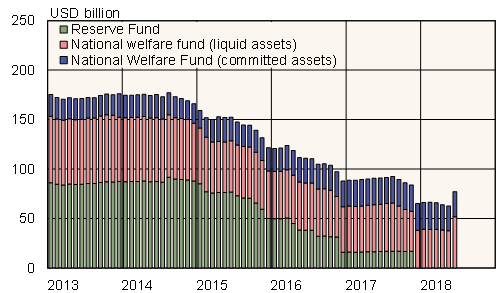