Revised 2016–17 data show that Russian industrial output, rather than the 2.3 % reported earlier, grew by 4.3 % over the two-year period. The adjustment was due almost entirely to large improvements in performance of manufacturing firms. Instead of the earlier-reported 0.7 %, manufacturing output in 2016–17 rose by 5.2 %. Some of the biggest improvements were seen e.g. in the chemicals, metal products and machinery & equipment categories.

Due to the higher industrial output assessment, Rosstat revised upwards also its 2016–17 growth indicator for the output of five core sectors of the economy by roughly one percentage point. The CBR has evaluated that the GDP growth figures for 2016 and 2017 might be revised up by 0.2–0.3 of a percentage point. 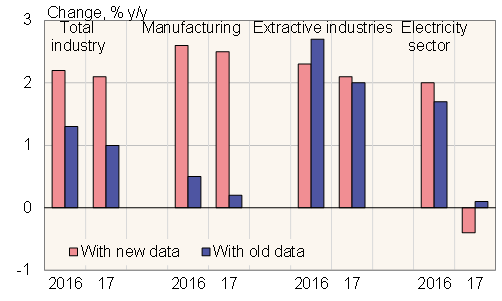