Preliminary balance-of-payments figures show the dollar-value of Russian goods and services exports rose in 2Q18 by nearly 30 % y-o-y. Much of the growth acceleration came from higher oil prices, as growth in other exports slowed slightly. The brisk export development was not reflected in imports, however. On-year growth of goods and services imports slowed further, with 2Q growth of just 9 % measured in dollar terms. With the euro's substantial strengthening w.r.t. USD compared to a year earlier, the rise in imports was just 1 % y-o-y in euro terms. The current account continued on hefty surplus amounting in annual terms to about 4 % of GDP.

Looking at the financial account, the net flow of Russia's liabilities abroad was $17 billion negative. The situation likely reflects the impacts of uncertainty created by the additional US sanctions imposed in April. Such large net outflows were last seen in 2014–15. Foreign debt of the public sector and banks showed particularly large declines in 2Q18. Russian banks were also much more active in repatriating foreign investments than in making new investments. 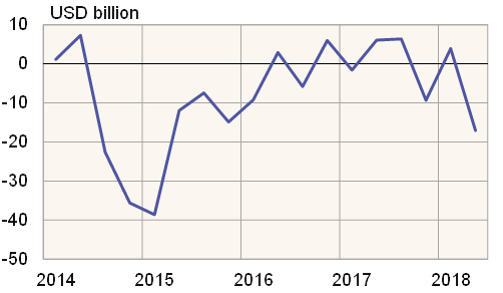