In an effort to move additional manpower to the front in the Ukraine war, president Vladimir Putin declared a “partial mobilisation” on September 21. The decree requires persons in the reserves with previous military training and necessary skills to report to mustering centres. While defence minister Sergei Shoigu stated publicly that the goal of the mobilisation was to recruit 300,000 soldiers, the public part of the decree itself contains no numbers on troops. Media reports suggest that the government’s goal is to boost Russia’s active military by 1 million in three waves by the end of this year.

Although rumours of a potential mobilisation have circulated for months, Putin’s decree surprised many. Share prices plunged on Russian stock markets on the announcement. As of Thursday (Sept. 29), Russian share prices were down by about 12 % from before the announcement.

The manpower quotas applied to some Russian regions are so large that they require recruitment of individuals who have never performed military service or received relevant training. It further appears that some of the first wave of recruits have already been sent to the front. About 200,000 Russians have already left Russia to avoid conscription. Popular destinations include Armenia, Georgia and Kazakhstan. Slightly over 60,000 Russians entered Finland via its eastern borders between September 21 and 29. Daily border entries were up by about 90 % from pre-mobilisation levels. During the same period, about 32,000 Russians returned to their home country.

Russia’s mobilisation can have also important economic implications. If the country mobilises, say, 1 million men by the end of this year, and another 300,000 leave the country by then, it would remove roughly 7 % of Russia’s 20‒39-year-old men from the labour pool. Many firms have asked officials to exempt or defer the conscription of their employees.

Russia has about 10 million more women than men. Gender disparity widens for older age cohorts (population pyramid as of 2022) 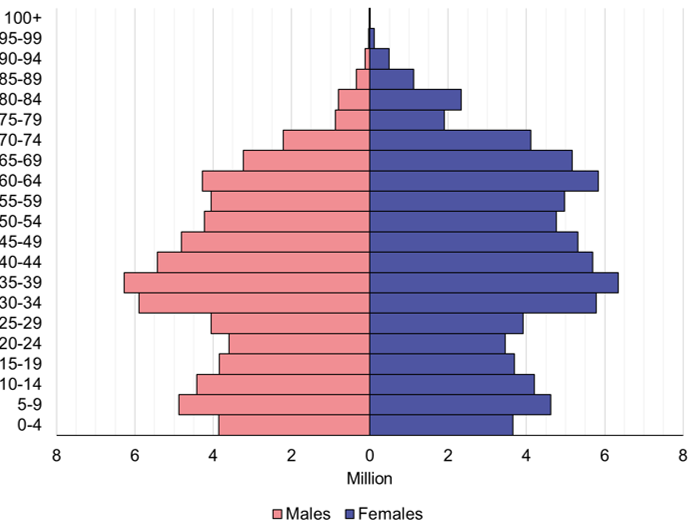