The main monthly indicators for the Chinese economy show that growth strengthened in August relative to the June and July, and especially January-May, when covid restrictions and lockdowns severely depressed economic activity. Housing construction continued to decline in August, however, and the combined uncertainty from zero covid policies and real estate sector problems depressed domestic demand.

In nominal terms, retail sales growth accelerated in August to over 5 % y-o-y. Although China’s National Bureau of Statistics has discontinued releasing figures for real retail sales growth, it is possible to roughly estimate, based on August consumer price inflation of 2.5 % (2.7 % in July), that retail sales grew by just under 3 % y-o-y in real terms. The recovery in automobile sales and last year’s low basis reference largely accounted for the acceleration in on-year retail sales. Reductions in the car sales tax helped boost car sales by 16 % y-o-y in August. Fewer cars, however, were sold in January-August than in the same period last year. The NBS reports that seasonally adjusted nominal retail sales fell slightly from July to August. Retail sales have slowed on-month since June.

Thanks to a boost from export growth, industrial output has outperformed retail sales this year. The 12-month growth in industrial output accelerated to just over 4 % in August. Export growth significantly slowed in August, however, from early summer. While the value of exports rose by 7 % y-o-y in dollar terms (18 % in June-July), the value of imports in August was unchanged from August 2021. The volume of trade has grown more slowly than the value of trade. Figures from China Customs show that the volume of goods exports grew 3 % on average in January-July, while the volume of goods imports contracted by 8 %. The slowdown in export growth is expected to continue with the ongoing weakening of global demand.

The financial angst of China’s real estate developers is now entering its second year. The decline in construction activity and housing sales has depressed economic growth generally – and no quick fix to the situation is expected. The government has yet to move ahead with wide-ranging support measures or developer bailouts. New building starts in August were down by 46 % y-o-y (measured by floorspace), while apartment sales were down by 23 %. Reliable overall statistics on housing prices are unavailable. The NBS tracker of housing markets in China’s 70 large cities showed that August apartment prices (for existing apartments) were down in 61 cities compared to August 2021. The NBS tracker reveals a broad-based drop in apartment prices not seen since 2015. 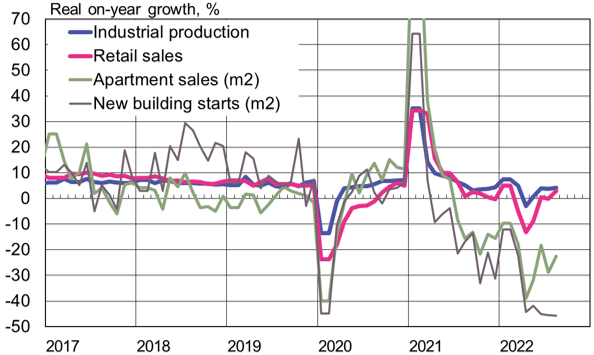