Most major institutional forecasters last spring still expected Chinese GDP growth in the range of 4–5 % in 2022. The World Bank’s forecast team now expects the Chinese economy to grow by just 2.8 % this year. The OECD revised its estimate downward last month to 3.2 % and the Asian Development Bank (ADB) anticipates 3.3 % growth.

Investment banks are also more pessimistic about China’s growth prospects. The Economist’s poll of forecasters’ expectations of China’s 2022 GDP growth had already fallen by the end of August to 3.6 %. In Bloomberg’s survey, Chinese growth expectations this year were reduced to 3.4 % in September. The Conference Board and Capital Economics, both grounding their China projections on their own alternative growth estimates, offer even more dismal GDP growth numbers. The Conference Board lowered its 2022 growth forecast last month to 2 %, while Capital Economics dropped its forecast to zero. BOFIT’s April forecast for China expected 2 % this year. We release our revised outlook at the end of this month.

The main factors dragging down growth expectations are production closures caused by covid lockdowns, weak trends in private consumption and the ongoing distress of China’s real estate sector. The global economic outlook has also weakened, most notably in the US and Europe – a situation that implies lower growth prospects for Chinese industrial output and exports. China’s leadership apparently abandoned the pretence of unrealistic growth targets already last July, when the Politburo issued a statement lacking any mention of a numerical GDP growth target (“around 5.5 %”, published in March). Instead, the various levels of government were encouraged to pursue “the best possible outcome.” Most forecasting institutions still expect GDP growth in the range of 4–5 % in 2023. 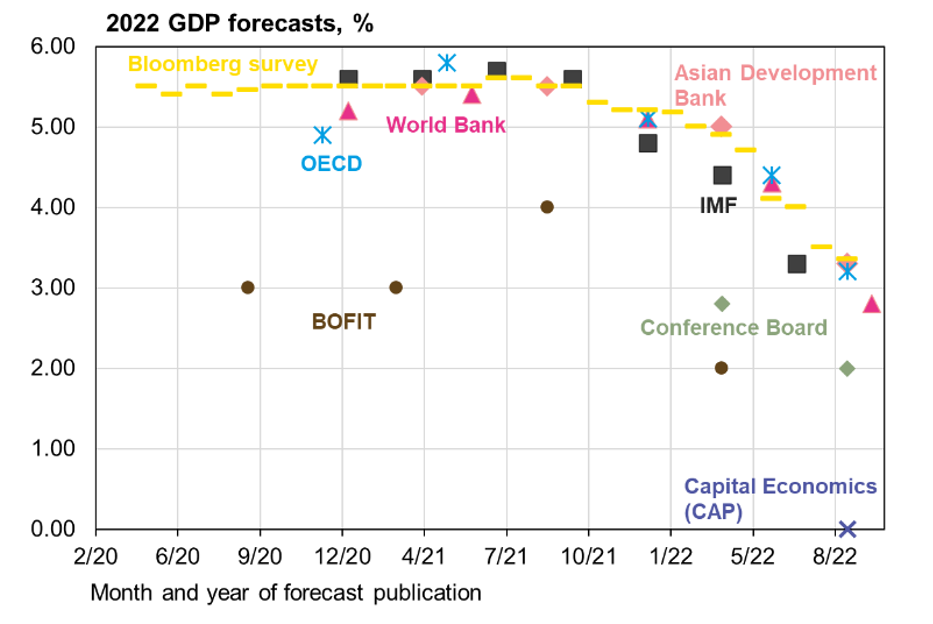