Parallel importing refers to imports without the permission of the intellectual property owner that circumvent authorised distributors of the goods. Russian law on parallel imports has generally required that offenders pay compensation to the intellectual property owner and destroy the improperly imported goods. As of May 7, however, parallel imports of many goods are now permitted in Russia. The decision to legalise parallel imports covers a wide range of items from cosmetics to car parts and gaming consoles. For some goods, the dispensation only applies to certain trademarks of companies based in countries deemed “unfriendly” to Russia.

The Russian government’s purpose in allowing parallel imports is to make imported goods available domestically and harm foreign companies that produce the goods. Western sanctions on Russia ban the export of many goods to Russia. In addition, many firms have decided on their own to suspend or cease their Russian businesses.

Russian Customs has halted its release of foreign trade figures, but the export figures of other countries indicate a substantial decline in Russian imports in March. The combined dollar-value of goods exports to Russia from Germany, France, the US, Japan, Korea, China and Turkey was down by nearly 40 % y-o-y in March. These countries traditionally account about half of the goods Russia imports. Finnish Customs reports the value of Finnish goods exports to Russia was also down by about 40 % y-o-y in March.

Russia is not highly dependent on imports in basic necessities such as staple foods and fuels, but most sophisticated consumer and investment goods – particularly high-tech products – are mainly imported. The unavailability of such goods, many of which are critical in production processes, could reduce Russian output significantly in many branches (BOFIT Policy Brief 4/2022). It is often difficult for Russian producers to provide adequate substitutes for imported goods. Indeed, while Russia has had strong import substitution policies in place for several years, the country’s dependence on imports has not decreased (BOFIT Policy Brief 3/2022). 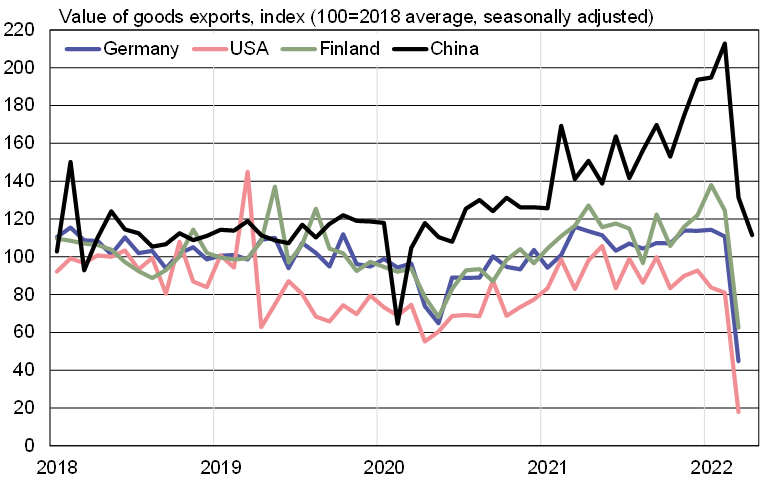