Covid lockdowns and the resulting uncertainty and supply-chain disruptions caused China’s key economic indicators to plummet in April. The National Bureau of Statistics reports that the value of retail sales went down by 11 % y-o-y last month, or at least 13 % in real terms. Value of catering service sales shrank by 23 % y-o-y, while car sales were down by 32 %. Retail sales have underperformed the rest of the economy throughout the pandemic. Based on month-on-month NBS growth figures, the volume of retail sales last month seems to be around the same level as it was three years ago.

Led by a decrease in manufacturing activity (down 5 %), industrial output contracted by 3 % y-o-y in April. NBS figures show that industrial output plunged from March, but still the level of output was roughly 18 % higher than three years ago. The decline in construction and sales of real estate became steeper in April. New building starts, measured in terms of floorspace, fell by 44 % y-o-y, while real estate sales fell by 39 %. 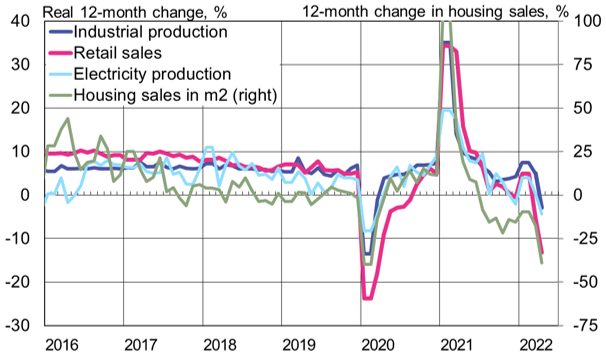