The latest batch of forecasts released in April and May see the Russian economy contracting by roughly 10 % over the course of this year or continuing partly into next year. Most forecasters expect the recovery in GDP to begin only in 2024. Due to large discounts on Urals-grade crude oil in recent months, Russian forecasts see relatively little increase in the average oil price this year compared to 2021 (Bank of Russia expects 9 % higher oil prices, while Russia’s economy ministry sees an increase of 20 %).

According to the CBR and World Bank, Russia’s total imports should drop by about a third this year, while the IMF expects a decline by about a quarter. The CBR and IMF see the volume of Russian exports falling by a fifth this year, while the World Bank’s forecast, which includes announced import bans on oil & gas and a considerable drop in Russia’s other exports, says the decline could be as much as a third.

Forecasters at the IMF and World Bank expect Russia’s government budget spending to rise significantly this year (although inflation will swallow the increase) and a turn of budget balance into deficit. Depending on budget revenue expectations, this year’s budget deficit could be limited to about 2 % of GDP (World Bank), or plunge to around 4 % of GDP if, among other things, the government goes ahead with proposed tax breaks (IMF).

Few forecasts include predictions of unemployment. The consensus forecast compiled by the CBR expects the unemployment rate to climb this year to nearly 8 %, while the IMF sees unemployment exceeding 9 %. 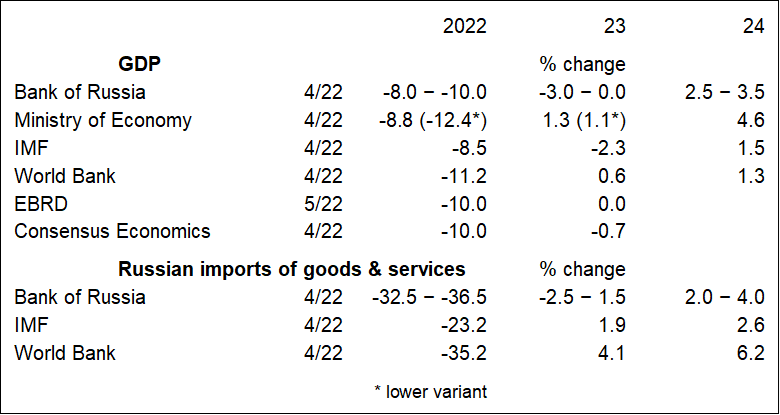