In our Forecast for China 2022–2024, released last week, we anticipate China’s GDP growth to reach just 2 % this year. Measures to boost the economy should begin to take effect in the second half of this year, which, combined with a rebound in consumer spending, should lift Chinese growth to 4 % in 2023. Growth then slows to 3 % in 2024. Growth figures are rough estimates, and they provide a sense of trends in China’s actual output. This year the difference between the government’s official GDP growth figures and actual situation is expected to widen. Officials are under tremendous pressure to report growth figure in accordance with the government’s target of “about 5.5 %” of GDP.

Economic growth this year is defined to a large extent by the spread of covid and strict measures to deal with it. Increased uncertainty and strict zero-covid policies will depress consumer spending, interfere with normal business operations and create a host of logistical challenges. Recent purchasing managers’ indices suggest that both manufacturing and services activity contracted sharply in April. However, there is little indication that China is yet ready to abandon its zero-covid suppression strategy and pursue an alternative approach. We expect highly contagious virus variants to spread widely in China and that many cities will face temporary lockdowns as they attempt to implement the zero-covid strategy.

Public sector investment should soar this year as China is easing fiscal policy to support growth. The bulk of responsibility for stimulus spending, however, falls on local governments, many of which are already saddled with large deficits and massive debt. The willingness and ability of local governments to implement a broad stimulus may also not comport with Beijing’s wishes, especially when local government will need to use large amounts of resources on covid measures. The latest wave of the pandemic has complicated investment projects and represents yet another blow to China’s struggling real estate markets and construction. This reduces local government revenues, particularly from the sale of land use rights.

China has begun to loosen its monetary stance to support growth. Despite a relatively modest rise in consumer prices that leaves room for further easing, the People’s Bank of China must weigh any accommodation against the financial stability risks. Moreover, China’s monetary policy direction contradicts the general trend in other major economic blocs. Rate hikes, particularly in the US, have already increased capital outflows from China. If China lowers interest rates when the rest of the world’s central banks are raising, the spread between China and others will widen rapidly, causing increased capital outflows that put further depreciation pressure on the yuan.

Large uncertainty clouds the economic outlook. If covid lockdowns become widespread or the current covid wave continues longer than expected, economic growth would slow even further. On the other hand, if the spread of covid is brought under control relatively quickly or China adopts a more modest covid strategy, growth could be higher than forecast. The real estate sector’s financial woes continue to worsen, and they could spill over into the financial sector. China’s current tightrope act that seeks to appease both the politically important considered Russia and the economically critical West might end. How China ultimately sides could profoundly affect its economic future.

The stage is set for president Xi Jinping to be nominated this autumn for his third term as the leader of the country. The state’s role in the economy and society has increased during Xi’s term as party leader. Decision-making has become increasingly concentrated in the hands of a single individual. Such concentration of power can lead to bad policies with unfortunate economic consequences. China’s long-standing pragmatism on economic matters has increasingly become tainted by political and ideological posturing that risks inappropriate or even damaging policy actions. The current line of stability and excessively ambitious GDP growth targets still continue to dominate economic policy, leaving little room for the government to push ahead with critical economic reforms. 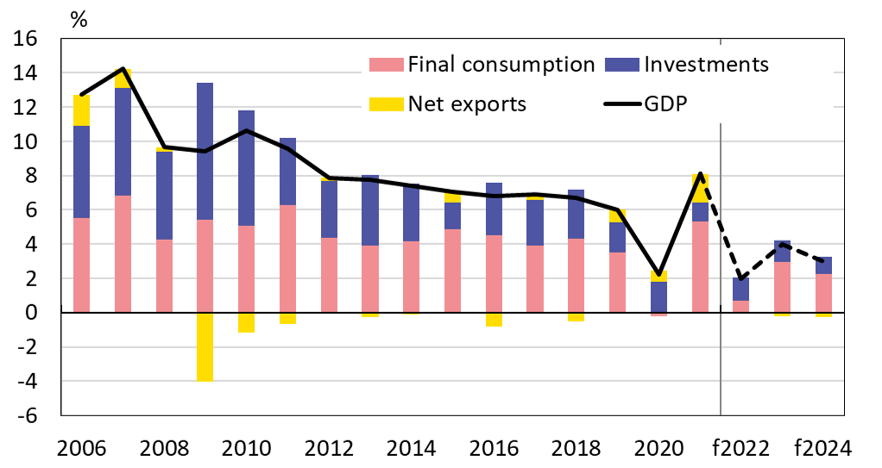