On April 29, following improving conditions on financial markets and falling price instability risks, the Central Bank of Russia lowered its key rate by 300 basis points. The key rate currently stands at 14 %. Markets expected rate cut as the CBR earlier said that it would lower the key rate when the situation stabilised. The CBR stated that it sees room for further rate cut this year if the economy develops in line with its expectations.

The ruble’s exchange rate plunge after Russia invaded Ukraine, along with domestic hoarding and supply bottlenecks, have caused inflation to soar in Russia. The CBR estimates that consumer prices at late-April were up by 18 % y-o-y. Inflation pressures have eased in recent weeks, however, with strengthening of the ruble and easing of demand. After skyrocketing in March, household inflation expectations moderated in April and now are similar to those of last autumn.

According to the CBR’s forecast, annual inflation would be between 18 % and 23 % this year and fall back to around the central bank’s inflation target of 4 % p.a. in 2024. 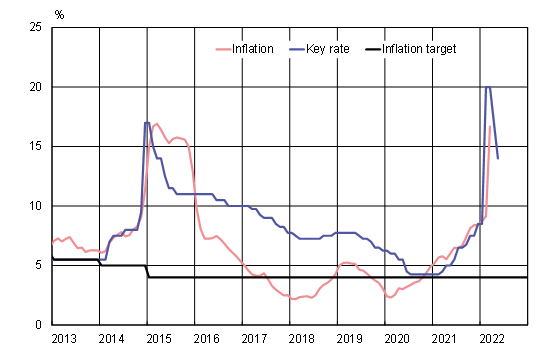