On Wednesday (Dec. 15), the People’s Bank of China lowered its reserve requirement ratios (RRRs) for commercial banks by a half percentage point. The change applies to all banks except those small banks that already enjoy the lowest RRR available (5 %). RRRs in China are based on bank size. The general RRR for large banks now stands at 11.5 %. The central bank can grant concessions on RRRs to banks that meet certain criteria in their lending structure. Most banks are currently entitled to a one-percentage-point reduction in their RRR. In addition, the PBoC makes bank-specific determinations of the appropriate RRR. The PBoC’s average weighted RRR for the banking sector now stands at 8.4 %.

According the PBoC, the cut in RRRs is intended to support the real economy and reduce financing costs. Despite these objectives, PBoC states it will not mean a shift in the monetary policy stance that will remain “sound”. The measure freed up 1.2 trillion yuan ($190 billion) in bank liquidity. Much of the liquidity boost was immediately absorbed as 950 billion yuan in 1-year MLF loans granted by the central bank to commercial banks came due on the same day and 500 billion yuan in new MLF loans were issued.

Bank RRRs were last lowered in July, but other major aspects of Chinese monetary policy have remained untouched this year. In its operations, even with the easing of reserve requirements, PBoC has increased market liquidity far less than in recent years. This year up until December 15, the net liquidity impact from open market operations (OMO) has been negative and fewer MLF loans (and targeted TMLF loans for a specific purpose) were granted than matured.

China’s main reference rates have not been adjusted this year. The PBoC this month decided to keep unchanged its rate on MLF loans (2.95 % on a 1-year loan). The LPR rate, the reference rate for bank loans, is set relative to the MLF rate so there has been less pressure to change it this month (the LPR rate is set on the 20th of each month). The PBoC, however, decided this month to cut its relending rate for banks by 25 basis points (e.g. the 1-year rate fell to 2 %). The relending programmes are a more targeted instrument aimed at small and mid-sized banks to allow them to provide affordable loans for specific purposes such as lending to the SMEs. The banks can then apply for PBoC relending funds.

While the RRR for yuan deposits was reduced, the PBoC raised the RRR for forex bank deposits on December 15 from 7 % to 9 %. The move can take appreciation pressure off the yuan, but its impact is seen to be quite modest with respect to the banking sector and the forex market. Adjustment of the forex RRR was reintroduced this year and it was raised previously in June. The yuan’s has appreciated significantly this year (BOFIT Weekly 48/2021). 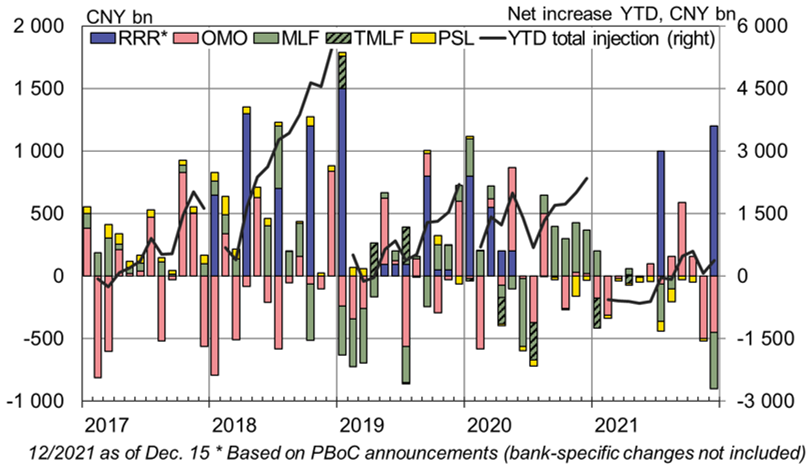