China’s National Bureau of Statistics reports that November consumer prices were up by 2.3 % y-o-y. As recently as September, consumer price inflation was still below 1 %. The pickup in inflation is due to energy prices, which were up strongly this autumn, while the almost year-long deflation in food prices came to an end in November. Core inflation, which excludes energy and food prices, has remained stable at around 1 % y-o-y since last spring. Rising energy prices are also reflected in the sharp rise in producer prices in recent months. Even so, the increase in consumer prices is still well under the 3 % inflation ceiling set for 2021.

Energy prices are up in China. Fuel prices in particular have risen with global crude oil prices. Moreover, household utility prices jumped in October and stayed up in November. Looking at food prices, fresh vegetables climber by over 30 % y‑o‑y in November. On the other hand, China’s favourite meat, pork, is over 30 % cheaper than year ago as pork prices have normalised during this year from the major shock in pork production and prices caused by the African swine fever virus in 2019.

Inflation has accelerated at the same time as economic growth is waning all major monthly economic point downwards. On-year real growth in retail sales, slowed to 0.5 % in November, implying weakening domestic consumer demand. Industrial output growth remained below 4 %, which is well below pre-pandemic levels of 5–6 %. Nominal growth in fixed investment slowed slightly. To support economic growth, the PBoC slightly relaxed its monetary stance this month by reducing the reserve requirements for commercial banks. 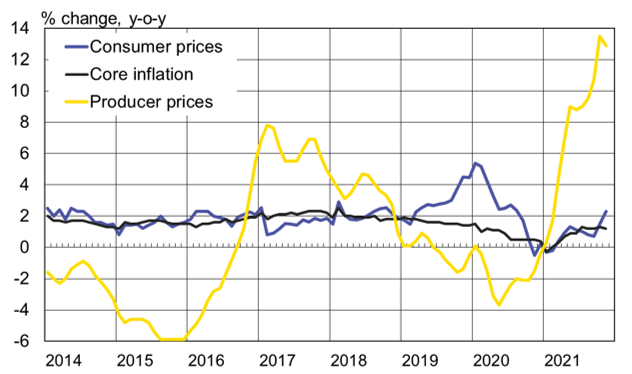