The massive Chinese real estate developer Evergrande continues to make international headlines after it defaulted at the start of this month on $83 million in coupon payments on its foreign debt. The payments originally came due on November 6, but Evergrande was given a 30-day grace period to pay up. When the grace period expired, Fitch downgraded Evergrande and two of its subsidiaries to “restricted default.” The classification applies to firms that have yet to officially enter bankruptcy or restructuring processes, even with defaults on debt or interest. Evergrande has established a seven-member risk management committee comprised largely of persons with government ties. The arrangements are strongly connected e.g. to Guangdong’s local administration. After Evergrande’s default, PBoC governor Yi Gang announced that investors and creditors rights would be fully respected under the law in terms of payment priority. Nevertheless, the debt restructuring process is likely to be long and complicated.

This month a second large Chinese developer, Kaisa Group, failed in its attempt to get investors to agree to swapping $380 million in maturing debt for bonds maturing at a future date. After investors rejected the deal and failed to receive their coupon payments on December 7, Fitch also downgraded Kaisa Group to restricted default.

The struggles of Chinese builders are seen widely across the real estate and construction sector. Since last summer, both construction activity and real estate sales have declined. The role of the real estate sector in the Chinese economy, the current turmoil and the possible impacts of a sectoral crisis on China’s national economy and the euro area are discussed in our latest BOFIT Policy Brief. At worst, the impacts on employment and consumer demand could be massive, increasing uncertainty and social unrest. If China’s economic growth slows significantly and uncertainty spreads abroad, the impacts on growth in the euro area could be severe. 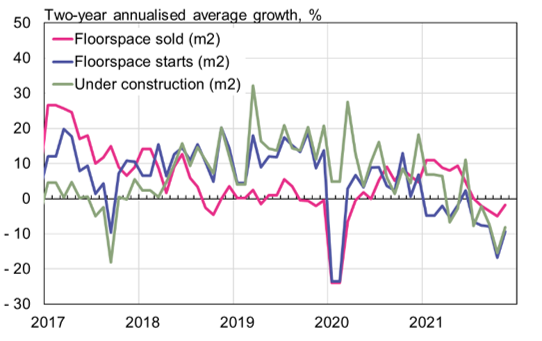