November consumer prices were up by 8 % y-o-y. Food prices, one of the biggest drivers of inflation, rose by 11 % y-o-y. Prices of non-food goods rose last month by 8 % y-o-y and prices of services by 5 %. The acceleration in inflation is a global phenomenon and largely reflects transitory supply issues. The rapid recovery in demand has also contributed to higher prices as production capacity in Russia is approaching it limits.

The spike in food prices appears mainly due to temporary factors. World prices for food and agricultural inputs such as fertilisers have soared. In Russia’s case, the upward price pressure also reflects the poor performance of domestic agriculture. Farm production contracted in the third quarter by 6 % y-o-y due to poor weather and other factors. Russian food imports are restricted by the import restrictions Russian government imposed in 2014 on several Western countries.

Transitory effects have impacted prices of services and non-food goods. Bottlenecks in global production and logistical problems have been manifested in Russia as rapidly rising prices for e.g. materials used in construction, automobiles and electronics. Prices of travel services have risen rapidly this autumn with the lifting of travel restrictions and the imposition of “non-working days” between October 30 and November 7 to quell the spread of covid.

Inflation has also been boosted by the rapid return of domestic demand. The Russian economy recovered to pre-pandemic levels in the second quarter and there has since been little excess production capacity in the economy. Moreover, the unemployment rate is at a historically low level. There are labour shortages in certain branches and wages are rising rapidly. Higher inflation and ruble depreciation have lifted inflation expectations, which has caused many Russian consumers to accelerate their purchases of durable goods.

In addition to the Central Bank of Russia’s efforts on the monetary front, the Russian government has invoked its own anti-inflation measures over the past 12 months e.g. by setting price ceilings on basic commodities (sugar, sunflower oil and fertilisers), export restrictions and export tariffs (e.g. grains, metals and raw timber), as well as paying subsidies to domestic producers (sugar and sunflower oil). In its recent analysis, the CBR warned about problems that could arise from the government’s direct and indirect price controls. Over the longer term, such price controls may depress fixed investment and production as well as encourage expansion of the grey economy. According to the analysis, a better way of dealing with the social impacts from a transitory spike in inflation is to provide targeted support to low-income households.

As elsewhere this year, inflation has surged in Russia 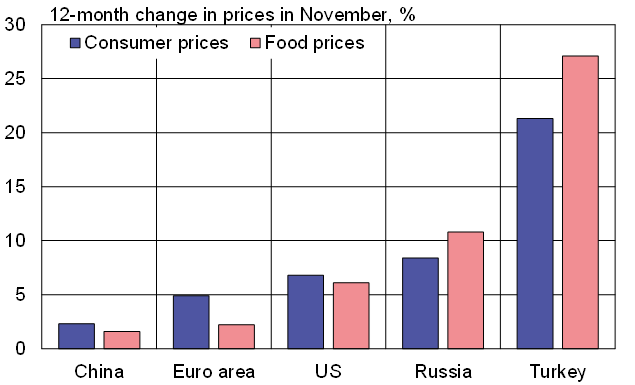