The People’s Bank of China started to use the China Foreign Exchange Trade System (CFETS) index to measure the external value of the yuan against a weighted currency basket of China’s main trading partners in December 2015. In late November, the CFETS index hit its highest reading since 2015. Measured by the CEFTS index, the yuan has appreciated 8 % since the start of this year. The October figure for China’s real effective (trade-weighted) exchange rate (REER) released by the Bank of International Settlements (BIS) last saw similar highs in February 2016.

The yuan has appreciated 2 % against the dollar since the start of this year. In the same period, the dollar has also gained against other currencies, so the appreciation of the yuan against the currencies of other trading partners has been stronger. For example, the yuan has strengthened 10 % against the euro since the start of the year. The yuan’s exchange rate against the dollar has remained relatively stable. The exchange rate of the offshore yuan (CNH) traded in Hong Kong has closely tracked the mainland China yuan (CNY) the past years. On Friday (Dec. 3), the US dollar cost 6.4 yuan and the euro 7.2 yuan.

The Chinese economy’s rapid rebound from the Covid Recession and burgeoning current account surplus have supported the yuan’s exchange rate. The goods trade surplus has risen rapidly while the service trade deficit has contracted as Chinese tourism abroad has dwindled to near zero. In addition, deregulation of capital controls and the inclusion of mainland China shares and bonds in major international indices has swelled the flow of capital into China. The yields in China are currently higher than in many advanced economies. At the beginning of December, for example, the yield on China’s 3-month government bond was 2.3 %. At the same time, the yield on a 3-month US treasury bill was 0.06 %.

Measured by the trade-weighted CFETS index, the yuan has climbed to levels not seen since 2015 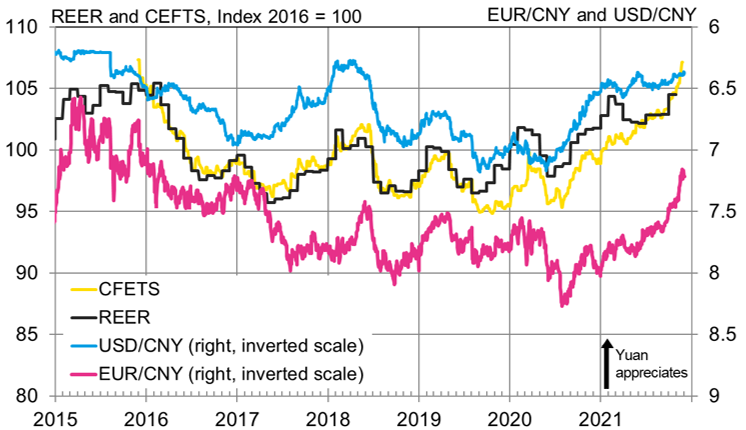