According to Rosstat’s preliminary estimates, GDP grew in the first nine months of the year by 4.6 % y-o-y. The economic development ministry reports that growth accelerated slightly in October, with GDP growth reaching 4.9 % y-o-y. Growth in industrial output largely supported economic growth in September and October. Industrial output grew by 7.1 % y-o-y in October and by 5 % for the January-October period. Growth in manufacturing output has slowed in recent months, while extractive industries have helped boost industrial output overall. October production of natural gas was up by 12 % y-o-y and coal by 11 %. The volume of oil production has also risen with the gradual lifting of production ceilings under the OPEC+ agreement.

One-time payments to pensioners and select groups disbursed in September (BOFIT Weekly 35/2021) helped boost retail sales in September and October. Even so, the pace of retail sales growth has gradually slowed. The volume of retail sales in October was up by 4.1 % y-o-y. The covid situation in Russia has rapidly degraded. The government declared a week of paid leave in early November that was coupled with restrictions on e.g. the hours that restaurants and bars could be open (BOFIT Weekly 43/2021). The restrictive measures have had only a marginal impact on economic trends, however.

The rapid economic recovery is reflected in wages and price trends. The unemployment rate fell in October to a historical low of 4.3 %. Nominal wages rose in January-September by 9 % y-o-y. Consumer price inflation has accelerated sharply in recent months. November consumer prices were up by 8.4 % y-o-y. Foodstuffs and construction materials experienced the steepest price rises. 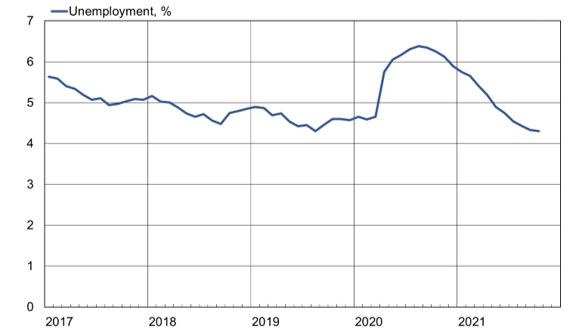