Member surveys conducted by the American Chamber of Commerce in China (AmCham China) and the European Union Chamber of Commerce in China (EU Chamber) find that both American and European firms are generally confident about growth of the Chinese market. Firms expressed concerns about covid-19 and politicisation of trade, as well as the fact that they still do not consider China’s business environment to offer a level playing field. The AmCham survey, which was conducted in October and November 2020, was based on responses from 345 US firms operating in China. The EU Chamber survey, conducted in February 2021, garnered responses from 585 European firms.

China’s economy recovered rapidly after the first wave of covid-19 in spring 2020 and generally brightened business prospects. Some 75 % of American firms operating in China said that they expected growth of China’s markets and economic recovery to continue, thus boosting their own prospects. Some 68 % of European firms in China were optimistic about the next two years. The 2020 EU Chamber survey found that 64 % of European firms operating in China expected their net sales to decline, but the latest survey shows that only 24 % of respondents had experienced lower sales. Consumer trade made the greatest contribution to sales growth of European firms. The EU Chamber suggests this is due to travel restrictions that have led China’s middle class to focus its spending on products such as cars, cosmetics and clothing.

The covid pandemic has affected the ability of firms to do business. Half of the responding Europeans firms said covid was one of their biggest hurdles to their ability to conduct business in China. Companies noted that covid limited their business travel both within China and internationally, and made it difficult for foreign workers to enter China. Additionally, some firms reported that covid disrupted their supply chains and reduced demand for their products and services.

The surveys found that several familiar issues still dog firms trying to do business in China. Firms report discriminatory treatment with respect to market access, public procurement, licencing and government subsidies. They also note that China’s regulatory environment is opaque and capricious. Some 41 % of European firms felt that the business environment had become more politicised, explaining that this was mainly the fault of the Chinese government and Chinese and international media. Nevertheless, foreign firms operating in China remain committed to serving the Chinese market and staying put. Indeed, like a similar proportion of the American firms in China, 59 % of European firms said they planned to expand their operations in China.

Responses from American firms emphasised the significance of US-China relations. Nearly all respondents saw good bilateral relations as important to their businesses. A large majority (78 %) said that heightened tensions in relations was the biggest challenge for the own business. US firms felt that phase 1 of the US-China trade agreement had somewhat calmed bilateral tensions. Responses submitted after the US presidential election tended to be more optimistic and showed greater expectation that bilateral relations would improve. Firms responding to the AmCham survey expressed hope that the US would refrain from exacerbating the situation, and that coming talks would focus on improving market access and protection of intellectual property in the Chinese market. Despite the frictions, the share of US firms planning to increase their investments in China has remained remarkably constant over the years, with only a small portion of firms even considering shifting their production away from China to other markets. 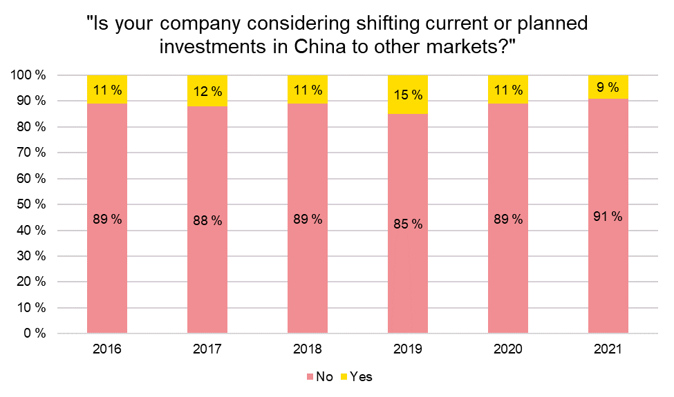 Sources: European Union Chamber of Commerce in China and BOFIT.