Led by the finance ministry, Chinese officials earlier this month announced they were putting local tax offices in charge of collecting the proceeds from land use right sales. Revenues are collected currently by the local governments’ natural resource departments that are expected to transfer them to the local treasuries responsible for managing the funds. In recent years, China’s National Audit Office has reported numerous instances of delayed booking of land use right proceeds that have instead gone to funding such things as indebted local government financial vehicles (LGFVs). While local governments continue to receive the land transfer income, the central government now has greater latitude in overseeing how money is spent. Local tax offices were unified in 2018 under the state tax authority, giving central administrators the possibility of direct oversight. On July 1, the reform will initially pertain to six provinces and one city. At the start of 2022, the reform will apply nationwide.

Ever-rising indebtedness by local governments has long been one of the primary concerns for Chinese economic policy. Nevertheless, political opinion on local debt regularly contradicts this view. China’s leadership showcased reduction of indebtedness a top priority in the previous five-year plan to no avail. Recent attempts to curb local government indebtedness have included limiting credit supply to local governments and directly suspending local infrastructure projects (BOFIT Weekly 17/2018). When economic conditions warrant, local governments get a mixed message encouraging them to increase debt-financed spending on new projects (BOFIT Weekly 36/2018). This is precisely what happened when the pandemic hit. Local government spending rose and the quotas on special purpose bond issues were greatly increased. Special purpose bonds should be used to finance fixed investments such as infrastructure projects that later generate sufficient income to repay the bond. Last year, however, the finance ministry made it possible to channel money from bond issues to other purposes such as supporting consumer demand.

With many believing that the worst waves of the pandemic now behind, the central government is again publicly calling on local governments to slow their pace of borrowing. For example, two major bullet train projects were put on ice by April. For the first time in three years, LGFVs issued less new debt in May than the amount of maturing debt. The value of bond issues was down by nearly 50 % from a year earlier and off by 80 % from April.

This year’s annual audit from China’s National Audit Office, which was published this month, found substantial abuses in the use of special purpose bonds issued by local governments. Some had been squandered on entirely non-productive investment, while others went to funding projects that were different from their intended purpose. The audit also revealed that state-owned financial institutions and local banks had illegally provided loans to local governments and their LGFVs. 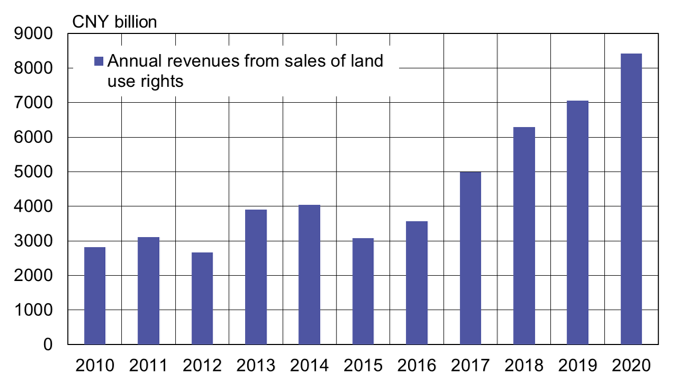