Many parts of the Russian economy posted eye-popping on-year growth figures in April, thanks largely to the low base reference from April 2020 which was the trough of the covid crisis. According to preliminary estimates released by the Ministry of Economic Development, GDP in April climbed nearly 11 % y-o-y. The ministry estimates, however, that GDP in April was still slightly below pre-crisis levels. The purchasing managers’ indices suggest that the economic recovery continued in May. The most recent forecasts also generally expect Russian GDP to grow by about 3 % this year.

Consumption-driven branches in particular have developed briskly this year, and their robust growth continued in April. Retail sales, for example, were already much higher than before the pandemic. Other service branches also recovered rapidly, but their output in April was still 6 % below April 2019. Services production saw the sharpest decline across sectors last spring as the lockdowns hit service branches particularly hard. Rising wages and increased employment in the first quarter of this year have helped the recovery in consumption. The average real wage rose by nearly 2 % y-o-y in the first three months of this year.

Despite a small drop from March to April this year, manufacturing has recovered rapidly to levels of output exceeding pre-crisis levels. Extractive industries have also experienced rising output in recent months, but production growth is still restricted by the ceilings imposed on crude oil production under the OPEC+ agreement. The current agreement allows Russia to gradually increase its crude oil output slightly further in the coming months, but requires that Russian oil production remain well below pre-covid levels until the end of April 2022.

Economic growth was further supported in April by the construction and agriculture sectors, which have generally been less affected by the Covid recession. Construction output, which remained resilient last year, showed robust growth in April. Total fixed investment in the first quarter of this year was up 2 % y-o-y (up 3.5 % y-o-y in the first quarter of 2020). Agricultural output even rose slightly last year. In April this year, it was at the same level as in April 2020. 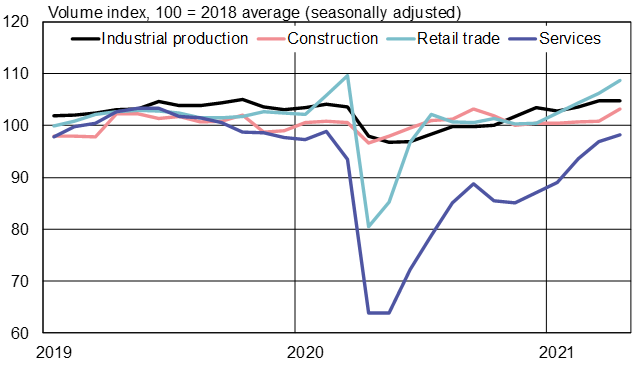