The National People’s Congress last week approved an anti-foreign sanctions law. The law, drafted behind closed doors, took effect immediately and permits freezing of assets, restricting access to China, as well as the banning of cooperation and transactions in China for persons or organisations that engage in imposing or implementing foreign sanctions or discriminatory restrictive measures against China. The law extends to family members and the management of targeted firms or organisations with which sanctioned individuals are affiliated. The vagueness of the law leaves room for interpretation and its effect on foreign firms operating in China depends whether or how it will be enforced. The EU Chamber of Commerce in China strongly criticised the lack of transparency in the law’s enactment. The law follows a directive issued in January by the commerce ministry requiring Chinese firms to report to officials any economically discriminatory acts taken against China.

Earlier this month, president Joe Biden issued a new executive order banning US investment in numerous Chinese firms seen as threats to US national security or democratic values. President Donald Trump last November issued an executive order requiring the Department of Defense to maintain a list of firms that US investments are forbidden (BOFIT Weekly 50/2020). The new Biden executive order updates the list of companies, which is now maintained and updated by the US treasury department. The list currently includes 59 Chinese firms. While some firms were dropped from the previous list, several new firms (e.g. firms involved in surveillance technologies) were added. The executive order enters into force on August 2, but gives investors a year to divest their holdings.

The eagerness of Chinese firms to list on US exchanges does not appear to have waned in the first months of this year despite the actions. According to Ernst & Young, half of new foreign listings in the US during January-March were Chinese (18 IPOs raising a total of $4.2 billion). During the same period, 101 IPOs with a combined value of $11.8 billion took place on mainland Chinese exchanges. A New York Stock Exchange representative commented that roughly 60 Chinese firms were planning IPOs this year. In May, there were 248 Chinese firms listed in the United States. Of those, eight are owned by China’s central government.

Despite bilateral tensions, China’s goods exports to the US and imports from the US have rebounded rapidly since last summer 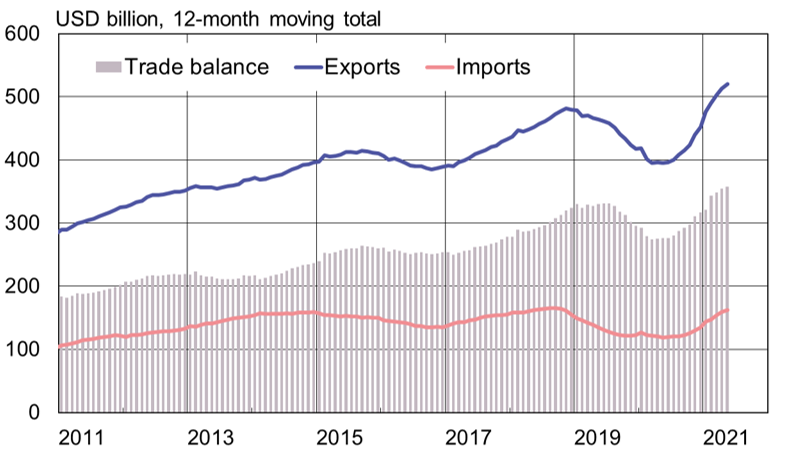